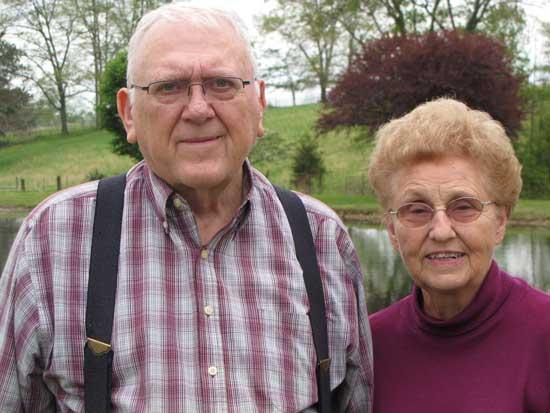 MILLARD YOUNG AND HIS WIFE, JEAN.
Millard Young will be 80 years old come the 20th day of August, and he has decided to go home to his farm.

Millard starting cutting hair with his father, the Late Houston H. Young, in 1956, but he has worked at the Palace Barber Shop since he was five years old. He is retiring and going home.

He will be cutting hair out of his shop on Red Hill Road for those who want to come out there to see him. And Millard has, over his career, made house calls to the ones who are too sick to come to town to his shop; he will still be doing that for hospitalized or bedridden clients and friends.

Houston, Millard’s, dad was born in 1907. In 1934 he and Jack Davenport (Buddy’s father) went into business together at the Palace Barber Shop. At this time the shop was one door up from Eller’s Shoe Shop on the square. Jack ran for Trustee in 1950 and Houston bought his share out and was the sole owner of the business.

Houston brought in other barbers to help from time to time. One in particular was his brother Leonard and a man named Coburn Snow. After a while Mr. Snow left for west Tennessee and started his own shop.

Millard had the job of cleaning up the shop and keeping the fire under a big water tank in the back of the shop. Millard was just a young boy at the time, but that was his responsibility. Houston kept the water hot because he sold showers to the employees of the cheese factory. They would come up after work and pay for a shower, clean up and I suppose get the smell of the process off of them before they went home.

Millard tells the story that one day he was with some school friends and they wanted to go to the cliff behind the Woodbury Church of Christ to go swimming in the Stones River. They kept urging him to go but he told them over and over he had to check with his dad.

Like the dutiful son Millard went and asked his dad if it was OK and his dad said he needed Millard to make sure the fire didn’t go out and it would be better if he stayed around. The shop was in front of the courthouse and just down from the church on the hill.

Against his better judgment Millard eventually made his way to the river. Millard said they had some good fun and lost track of time. When they got back to the square Millard and his friends looked over at the shop and there was Houston standing in front of the shop with a razor strap, the fire had gone out and Millard said “he thrashed me good.”

The boys he went swimming with had run over to the courthouse and watched the whole thing and laughed at him in school the next day. Millard said he never had to get another “whuppin.”

Millard married Margaret Jean Helton on September 16, 1951. Jean and Millard both worked at the Colonial Shirt Factory at one time with Jean being in accounting and Millard being a pattern designer. One Sunday Jean and Millard went over to his dad’s house and after dinner Houston asked Millard to come join him in the barber shop. He said he would pay his tuition and all associated costs to send him to Barber College. Millard said he was very apprehensive about it because he wanted to be loyal to his bosses at Colonial. But Millard called his boss, Scoop Tiller, and asked for half a day off the next day and the boss said he could.

Millard and Houston went to Nashville to the Barber College and the owner said he just so happen to have a position open for the class that started in one week. Houston wrote the check and they went back home. When he told his boss what he did the boss said,  “Oh no, you can’t leave me,” but Millard told him he would come after school and stay with Colonial until he finished all the patterns that were to be brought on line and train a new pattern designer before he left. Millard did what he said he would do and in three months he left the shirt factory.

The school was a year long. After he graduated Millard continued with other schools to keep him on top of the different hairstyles that came with the changing of the trends. He said that he and Jean worked with his dad and ran the place, but he said he always ran the ideas through his father before they did anything to change.

Millard had always been involved with gospel singing; his dad had taught him and his two sisters, Gladys and Flossie, to sing and they were the Young’s.  Around 1974 Millard’s mother died and Houston moved in with Millard, Jean and family. Houston lived with them for 14 years.

One particular day Millard and his gospel group, The Watchmen, were at a singing and his father stayed home. Millard said that he had left some wood on the stove to help keep his dad warm; it was in March of 1987. When Houston was ready for bed he bent over to put the wood in the stove and had a dizzy spell and fell on the stove. He hurt himself and went to bed. When the family got home they checked on him and found that he had been hurt. They took him to the Stones River Hospital. They met Dr. William Bryant there and he checked Houston out and found that he had broken some ribs. He kept Houston over night and Millard went home.

In the morning Houston was in the hospital bed, turned over by himself and yelled out. Dr. William came running and found him. It seems that when Houston turned over his ribs went through a lung. Dr. William called Millard and told him to come to the hospital and to hurry. It took Millard 10 minutes to get there. When he did get there his dad was gone. Houston died; he would have been 80 in May.

Millard was inducted into the Gospel Music Hall of Fame in 1988, an honor he is really proud of. His career in singing has taken him where he has always wanted to be and that was in the service of God. He had built himself a recording studio at his farm and has put out many music CDs and tapes. His children sang with him for much of the time and he has led churches throughout his life as song leader. Some of the people he has sang with where Dallas Fox, Lytton Francis, Dewey Bryson and of course his son, Kim.

Four weeks ago in March, Millard fell and injured himself. He cracked some ribs and now he is slowing down. Millard and Jean have the two children, Kim Alan Young and Faith Renee Patterson. They have 3 grandsons and two granddaughters.

Millard owns everything he has and rents out 220 acres to pasture. He has a home, buildings, garden and a spring fed pond. He says he and Jean will relax and take care of his place which is right across the road from where he grew up. Good luck Millard.

Print
Members Opinions:
gassaway
[Delete]
Cong. you mentioned Coburn Snow, he was my father and the name should be spelled Corbin, I remember him working with your father. Enjoy you your new phase of life.
[Delete]
Congratulations to Millard and Jean. I wish them the very best.

C. Pearl a friend and former classmate.
[Delete]
Gassaway, it was my fault. They called him Corbin, but it sounded like Corburn, I never asked for a correct spelling, sorry.
Bob Stoetzel