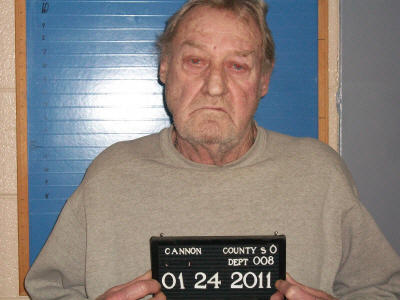 A local man carried his drinking problem with him when he turned himself in at the Cannon County Jail recently.

Deputy Travis Turney observed a white male in the lobby of the Cannon County Sheriff’s Department on July 1 at approximately 7:30 a.m. who appeared to be passed out.

After four attempts to get the subject to respond, he awoke suddenly and appeared to have bloodshot eyes. Deputy Turney could smell a strong odor of alcohol about the man.

Upon speaking with the man he appeared to have slurred speech. The deputy asked the man why he was at the sheriff’s department and he appeared to be confused and could not advise.

After speaking with corrections officers, Deputy Turney was advised of the man’s name, Golden Robertson, of Jim Cummings Hwy., and that he was at the CCSD to serve weekend time on a DUI conviction.

Robertson at first denied having been drinking when asked by Deputy Turney, but then changed his story and admitted having a few sips of a beer and spitting it out before he arrived at the jail. Robertson then said he did not like beer.

After further questioning, Robertson stated he drank one beer instead of taking a sip. Deputy Turney advised Robertson he did not believe his story and placed him under arrest for public intoxication.