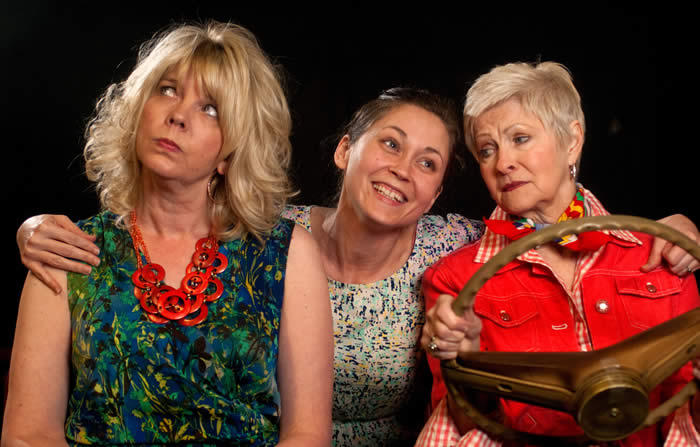 An outrageously hilarious race against the clock begins when Savannah Sprunt Fairchild Honeycutt agrees to get her feisty mother all the way from Alabama to California in time for her brother's wedding. Savannah's problem: MAMA WON'T FLY. With only four days to make it to the ceremony, this determined daughter has no choice but to drive cross-country with her equally willful mother in Mama's vintage sedan.

As Savannah steels herself for this hasty ill-conceived road trip, another outrageous complication arises: the bubbly, over-eager bride-to-be arrives unannounced.

The journey begins and comedic chaos ensues. Every conceivable - and inconceivable - mishap that can occur does, including a near-fatal encounter at an underwear museum, a mad dash across the desert in a hijacked eighteen-wheeler and a riotous detour to Vegas that ends in a brawl with an ordained showgirl minister.

Join us for this ferociously funny family-friendly comedy that will have you laughing your way across the country and all the way down the aisle!

Mama Won't Fly is directed by Phil Mote and produced by Heather Willow.

Tickets may also be purchased online at www.artscenterofcc.com. "The Blue Porch @ Arts Center" restaurant is open before all performances.

Mama Won't Fly is sponsored by First Bank and is part of the 2013 Subscriber Series. The Arts Center is located on 1424 John Bragg Highway, just west of the town of Woodbury, approximately 20 minutes from Murfreesboro, Manchester, and McMinnville and one hour southeast of Nashville. Box office hours are 10:00 a.m. to 4:00 p.m., Monday through Saturday.