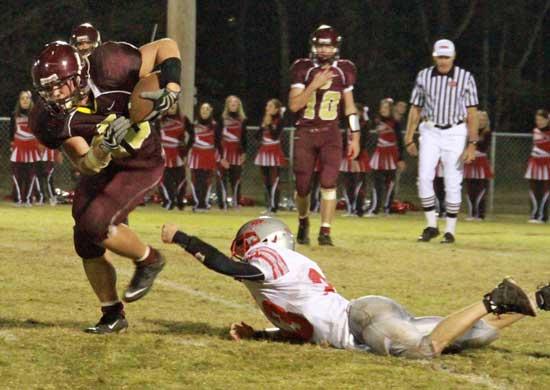 Gabe Walkup escapes a Scott County defender Friday.
It was not a happy Homecoming for Cannon County.

The Lions spotted Scott County (4-3) an early lead and never challenged during a 48-0 setback on Homecoming at Schwartz Field. Cannon County (0-8) was shutout for the first time this season.

Effort and fight — constants for the Lions even during a dismal season — were not prevelant during their most recent setback against Scott County.

"I'm disappointed in our effort. Our intensity and our effort was not good," Cannon County Head Football Coach Joel Schrenk said. "Maybe it was because it was Homecoming but the effort we always play with was not there tonight."

Senior tailback/linebacker Gabe Walkup was a constant. Walkup rushed for 105 yards on 24 carries to surpass the 100-yard mark for the sixth time in eight games. He is averaging more than 100 yards per game and is on course to surpass the 1,000-yard mark. Walkup also left his mark defensively with a fumble recovery, two sacks and three tackles for loss among his many takedowns.

"Gabe did run the ball hard and had a lot of yards after contact and that's something he does each week," Schrenk said. "We just couldn't sustain much."

The offense, outside of Walkup was non-existent. The passing game produced just 13 yards and 10 of those came on a fake punt when punter/back-up quarterback Colin Jones connected with Walkup for a 10-yard gain on a fourth-and-2 play at the Lions' 38. The Lions, trailing 21-0 at the time, marched to the Scott County 10 before turning the ball over with a fumble. Cannon County had two drives end as a result of fumbles.

The Lions defense was able to collect two turnovers. Freshman B.J. Daniel continued to flourish at linebacker and had another solid outing. He forced a fumble and added a sack.

Other than allowing a 77-yard punt return for a touchdown that got the scoring started, Cannon County's special teams were vastly improved. Return man Brandon James returned from a two-game suspension and supplied a spark. He averaged 34 yards on returns, giving Cannon County possession at the 30-plus each opportunity.

James also blocked an extra point and freshman Waylon Sedtal blocked a punt. Jones averaged more than 33 yads a punt. Throw in the successful fake punt conversion and, all in all, the special teams enjoyed peak performance.

The Lions will face Smith County in the final home game of the season Friday at 7 p.m. It will be Senior Night for eight Lions seniors.