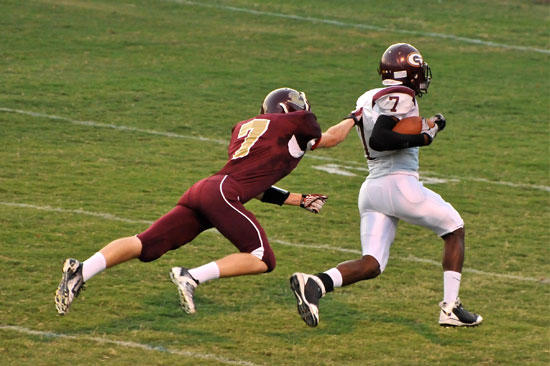 Cannon County’s offense was its worst enemy in the home opener against Grace Christian Academy at Schwartz Field Friday.

The Lions (0-2) had more than 300 yards total offense – 172 through the air and 130 on the ground – but they also were guilty of four turnovers in a 40-14 setback. Cannon County actually had seven fumbles, but it was able to recover three of those.

Two of the turnovers occurred in Grace Christian territory and curtailed potential scoring drives when the game was still within reach for both teams.

“Nobody is good enough to have four turnovers and win, and we certainly are not as young as we are,” Cannon County Head Football Coach Joel Schrenk said. “We did some things better offensively. We were able to take advantage of some of the things they gave us but the bottom line is you can’t turn it over and win.”

When the Lions were not giving the ball and, subsequently, the game away, they were much more effective offensively than they were a week earlier. Sophomore quarterback Ryan Jordan was 17-of-24 for 172 yards and one interception. Junior tailback Brandon James rushed for 73 yards on 16 carries and scored a touchdown.

“We did some good things, but we allowed a lot of that to amount to nothing with the turnovers,” James said. “I was guilty of some of those turnovers. I have to do better. Our offense can move the ball, as we showed tonight, but we can’t score if we are turning it over. That was a big difference in this game.”

Grace was not as giving and its ground game was too much for the Lions. The Golden Eagles had 476 yards total offense with all but 56 of those coming on the ground. Cannon County’s inability to stop the counter was critical. Running back Will Slack took advantage of the openings and rushed for 221 yards on just 11 carries. He scored on runs of 42, 4 and 71 yards.

Cannon County defensive linemen Thomas Stone, Dalton Ryan and Alex Campbell were admirable in the trenches. Stone and Ryan led the defense with more than 20 tackles.

“We have to do a better job stopping the run,” Stone said. “We gave up too many big plays on those runs and there were times that we needed to get off of the field on third down and couldn’t. We have to put this one behind us and look ahead to our first district game next week (against DeKalb County).”

Cannon County trailed 20-0 at the half despite moving the ball into Grace territory on three of five first-half possessions. The Lions reached midfield on the other two drives.

“We were down 20-0 at the half and if we don’t have the turnovers then we probably are at least tied,” Schrenk said. “Defensively, we couldn’t stop the counter. What we did was sound and we were coaching them up and making adjustments at the half, but it is youth and inexperience trying to adjust to coaching on the field and it’s hard for them because they have not played enough football to see it. We just have to keep working and improving.”

Justin Weaver came off the edge and blocked Austin Powell’s punt attempt midway through the third quarter. Weaver blocked the kick at the Golden Eagle 17 and returned it to the 5. Two plays later James powered his way into the end zone behind a strong block by Ryan McLaurine and Allan Robinson. James added the point after to make the score 33-7 with 9:38 remaining.

The Lions added another touchdown when Jordan connected with Tobin for a 41-yard gain and an apparent touchdown. Tobin beat the defense and was off to the races but he was stripped at the 1. Waylon Sedtal recovered the ball in the end zone for his first career touchdown. James added the extra point to close out the Cannon County scoring.