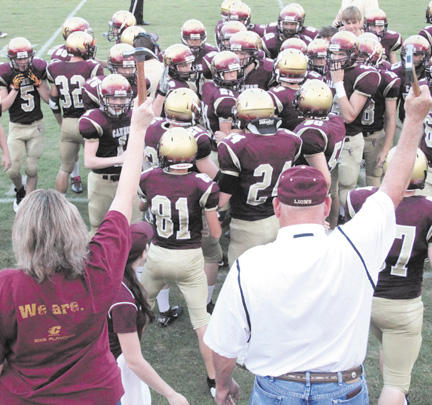 Cannon County was hoping for better results in its 2013 home opener but the Lions were unable to sustain drives and the defense was air raided for the second week in a 36-0 setback against Jackson County.

The Lions (0-2) were guilty of four turnovers and have failed to reach the end zone in the first two games of the season. Cannon County has lost 22 straight dating back to 2010. It is the second-longest losing streak in the state behind Fayette-Ware (52).

“We start drives moving the ball but we will have a penalty or bad snap that cost us yardage,” CCHS Head Coach T.J. Daniel said. “We seem to always be playing behind the chains.”

Quarterback A.J. Daniel led Cannon County with 49 yards on 17 carries. B.J. Daniel added 29 yards on nine carries. The Lions did not have a pass completion and were guilty of three interceptions while failing to collect 100 yards offense for the second straight week.

Nick Lacerte had a fumble recovery for the Lions, along with two tackles for loss, and Case Isenhart had an outstanding all-around defensive game that included his first career interception. B.J. Daniel led the defense with 18 tackles. Jonathan Smith and Ethan Smith were also active and turned in strong games; however, the Cannon County secondary was once again torched.

Jackson County had three touchdowns throught the air; however, the Lions gave up too many third-and-long situations setting up those scores.

Cannon County also had several players injured throughout the game. Their status was unknown at presstime. The Lions are on a bye this week and can heal their injuries before hitting the road for Red Boiling Springs.