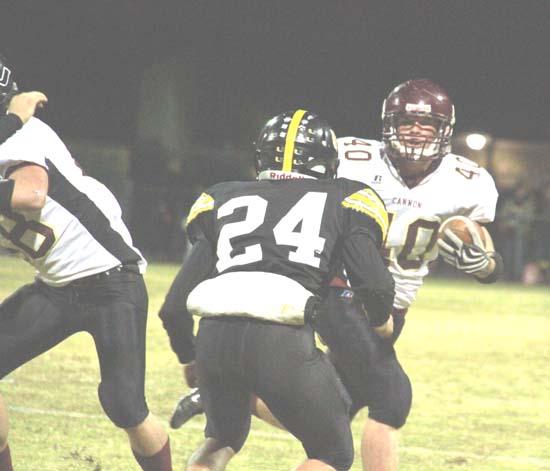 Needing a win in the regular-season finale at Upperman to avoid a winless season, the Lions put together their most impressive - and complete - performance of the season to capture a riveting 37-36 double-overtime win against the Bees.

Senior tailback Gabe Walkup led a Lions offense that erupted for a season-high 383 yards total offense with four touchdowns and 260 all-purpose yards. The physical tailback entered the game needing 111 yards to reach the 1,000-yard mark for the season. Walkup finished with a career-high 189 yards on 30 carries, but he did his best work with the game on the line.

Trailing 36-29 after Upperman scored first and kicked the extra point in double overtime, Walkup bulldozed his way into the end zone on a third-down play from 5 yards out, dragging three defenders along the way, to pull Cannon County to within 36-35. Jordan Linder completed a 2-point conversion to Charles Steelman to seal the win and erase a season full of frustration and provide a euphoric feeling the Lions had not realized this season.

"One win can erase a lot of losses in your mind," Cannon County Head Football Coach Joel Schrenk said. "For this season we are always going to be 1-9 but the feeling is going to be different ending with a win. I'm just proud of our kids."

Walkup scored both  of Cannon County's touchdowns in the extra periods and added a 2-point conversion pass to Jordan Linder in the first extra frame. He also had two receptions for 32 yards and added a 39-yard kickoff return.

"(Walkup) has been solid for us all season and he was again tonight," Schrenk said. "He finished the season with almost 1,100 yards and that's impressive, but Gabe meant so much more to this team. I'm proud of all of our players and coaches."

Walkup did what he has done all season but on this chilly night on the Cumberland plateau, he had a supporting cast. The Lions offense exhibited balance. The defense was sound throughout and special teams was prevalant. It was as solid of a performance as the Lions have displayed all season.

"We were not going to be denied," Walkup said. "This was the last game for the seniors. We wanted this win and it was a hard win to get. We never stopped believing in one another and we were determined to get this game."

Senior quarterback Heath Simons enjoyed his best all-around game under center, completing 8-of-17 passes for 189 yards, including a 53-yard strike to Colin Jones who streaked down the field untouched to hit paydirt. Jones also completed a 27-yard pass to Charles Steelman.

In fact, Jones was another of the seniors who left it all on the field at Upperman. He not only completed a pass and caught another for a score, but he also came up with a key interception with Upperman driving for what would have been a go-ahead touchdown late in the third quarter.

Defensively, the Lions easily turned in their best effort. They held the Bees to two offensive touchdowns in regulation and numerous players were crucial to the winning effort. Freshman Dalton Ryan was making plays all over the field. Ryan finished with three tackles for loss, he forced and recovered a fumble and he pressured Upperman quarterback Connor York and had him in the grasp to force an errant pass intercepted by Jones.

Walkup had two tackles for loss; Zach Osborne added a tackle for loss and a pass deflection, while Thomas Stone added a tackle for loss and led a defensive line that limited the Bees to 109 yards rushing. Linder also added a sack in the defensive showpiece. Other notable defensive superlatives were turned in by Damon Collette, who returned from an ankle injury that had sidelined him for four weeks; Ryan McLaurine, and B.J. Daniel.

And the offense clicked because an offensive line that paved the way for a solid ground attack and provided ample protection for Simons to survey the field. The line opened holes and dominated the line of scrimmage as the Lions rushed for more than 200 yards. Paving the way were Paul Oneel, Thomas Stone, Jared Melton, McLaurine and Osborne.

The game was tied 21-21 heading into overtime. Cannon County took possession first and came out in its "Beast formation," which it had not shown throughout the evening. Walkup lined up at quarterback. He needed just two plays to go the 10 yards and score. The Lions successfully completed the 2-point conversion when Walkup took the snap and pulled up, firing a rifle pass to Linder for a 29-21 advantage.

Upperman answered in two plays and completed the 2-point conversion to force a second overtime. The Bees went on offense first in the second overtime and needed just one play to score when Connor York threw a touchdown pass. The Bees converted the extra point for a 36-29 edge and the Lions faced their first deficit of the game.

Facing a third-and-goal from the 5, Walkup took the direct snap and barrelled over defenders on his way to the end zone. The stellar senior standout was in all all five offensive plays the Lions ran in the two overtimes and was lined up at quarterback each time.

"That's what we call our Beast formation and to be honest I have not been a real big fan of it but (offensive coordinator Eddie Cunningham) kept telling me we could run it," Schrenk said. "We got to overtime and I told him it was his, call it. (Cunningham) did a great job calling that series of plays. We scored twice out of it and we scored on a 2-point conversion out of it."

The way the game started it appeared fans would be in for an old-fashion shootout. Walkup scored from 36 yards out and Linder added the point after to give the Lions a 7-0 lead with 5:22 remaining in the first quarter. Upperman answered on its next drive to even the score 7-7.

Two plays later Simons connected with Jones, who raced down the field for a 53-yard touchdown - the longest scoring pass of the season for the Lions. Linder's point after was good and the Lions led 14-7 late in the first quarter. Upperman answered in just one play, a 69-yard pass play from York to Tyler Hadynski and the kick was true to even the slate 14-14  with 44 seconds remaining in the first quarter.

From there; however, the Lions defense would not allow another touchdown until overtime.

The Lions went back on top, 21-14, when Walkup scored from 3 yards out early in the second quarter and Linder added the point after. Walkup's 33-yard reception from Simons and his 42-yard run set up the score.

Upperman later scored on a punt return in the second quarter to tie the game, 21-21, but it would mark the end of the scoring until overtime.

"It just feels good to go out with a win," Jones said. "It's been a tough season but we have stuck together and that's why I believe the win feels even better. When times were tough we never quit working."

Print
Members Opinions:
redmolly
[Delete]
Way to go guys and coaches. As a former coach I can tell you there is a diffence between a 0-10 season and a 1-9 season.

mkjomurf
[Delete]
Unbelievable execution of plays during the overtime period. Great imagination displayed by whomever was calling the plays. No doubt they had practice each play several times to excutute to the perfection displayed on the field. Great WIN for the Seniors and something to build on for next year.