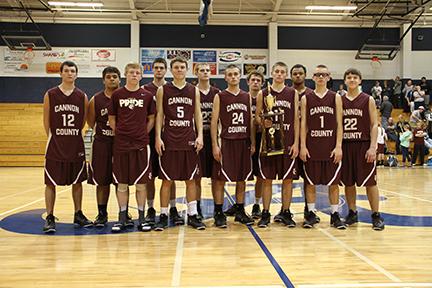 The Lions defeated Marshall County, Ky. 66-55 in game one of the Marlin Christmas Classic on Monday to put Cannon County in the semifinals.
The trio of Josh Ruehlen, Jacob Nave and Austin Martin accounted for 54 of the Lions' 66 points. Nave led the Lions with 24. Ruehlen added 18 and Martin finished a dozen.
The Lions (12-4, 3-1) took an early lead after scoring 21 in the opening frame, and extended their lead to 29-20 heading into halftime.
On 23-of-42 shooting from the field, Cannon County finished the game on 54 percent shooting.

One of the strengths for head coach Matt Rigsby's Lions is executing the full-court press defense.
It showed in Tuesday's win over Columbia Central as Cannon County forced 23 turnovers, clinching a spot in the Marlin Christmas Classic championship after a 64-54 win.
In three of its first four possessions, Columbia Central turned the basketball over, and the trend continued throughout the first half.
In the opening half, Columbia Central, a district 8-AAA team, committed 14 turnovers, and turned it over nine times in the second half.
Up 11-10 late in the opening quarter, Cannon County (13-4, 3-1) went on a 16-3 run that extended into the second period.
Offensively, Cannon County attacked the Columbia Central full-court press with three similar full-court, football-like passes all from Garrett McReynolds for easy layups.
"We have a call for that," Rigsby said on the full court pass. "It's kind of picking on opponents when they're down. They really want to overplay you and force a steal and get an easy bucket."
After consecutive baskets from Columbia Central's Jhaconus Blue, the Lions started another run of their own, scoring on seven of their next eight possessions to push the lead to 42-22, the largest lead held by the Lions.
Jacob Nave led Cannon County with 18 points scored, and Josh Ruehlen finished with 17.
Nave poured in 10 points in the fourth quarter alone, with six coming from the charity stripe.

The Cannon County Lions fell to Webster County, Ky., 69-52, to finish runner-up in the Marlin Christmas Classic on Wednesday in Panama City Beach, Fla.
Max McMain and Mason Roland led Webster County in scoring with 22 points each. The trio of Roland, McMain and Zac Shoulders accounted for 65-of-69 points for the Trojans.
"They just executed their dribble-drive exactly how I'm sure their coach taught them to do in practice," head coach Matt Rigsby said. "We ran out of gas in the second half, credit Webster County Kentucky, those kids can play."
The Lions (13-5, 3-1) were without Austin Martin during Wednesday's game following a death in Martin's family.
Trailing by two at the end of the third quarter, Webster County strung together eight consecutive buckets and pulled away with a 16-3 run in the final frame.
After a Rowland floater to give the Trojans a 6-4 lead, the Lions trailed for the rest of the game. Cannon County came within a point at 34-33 after a Briar Jakes trey late in the second quarter.
"We were chasing the whole game," Rigsby said. "We couldn't slow the game down for ourselves."
Down 24-19 in the second period, Cannon County scored on five of its next six possessions including four consecutive 3's to cut the deficit to 35-33 at the half.
"Offensively I was fine with what we were doing," Rigsby said.
Jacob Nave led the Lions with 21 points on 8-of-13 shooting. Josh Ruehlen added 14.

Comeback Kids of Cannon County Win at Warren County
A come-from-behind, 25-point fourth quarter pushed the Lions past Warren County in dramatic fashion with a 50-46 road win Saturday.
Down 35-25 heading into the fourth, the Lions (14-5, 3-1) outscored the Pioneers 25-11 in the final frame.
Twelve of Josh Ruehlen's 21 points came in the fourth quarter. He led all scorers with 21 and Jacob Nave finished with 13 points.
Ruehlen hit nine of his 13 shots at the free throw line. As a whole, the Lions shot 50 percent (16-of-32) from the charity stripe.
The Lions were outscored in the first and second quarter, trailing 25-15 at the half.
The win gives Cannon County an 11-4 record to finish out non-district play. The Lions resume district play at home. versus Upperman on Jan 6.