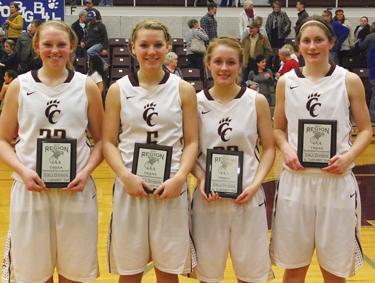 SPARTA - No one can accuse Cannon County of taking the easy way out.

The No. 2-ranked Lionettes could have won the Region 4-AA championship and played host to a Class AA Sectional game had it just made the most of charity against Livingston Academy in the title game.

Cannon County, generally a strong free-throw shooting team, was just 13-of-27 from the charity stripe and Livingston Academy came from behind to shock them, 57-54, in the championship game.

The loss sent Cannon County on the road for its Sectional game, which the Lionettes won at Sequoyah to advance to the state tournament.

It didn't have to be that difficult.

"We were 13 of 27 from the free-throw line. It is what it is," Lionettes Head Coach Michael Dodgen said. "We are a good free-throw shooting team and we have been all season so it is just one of those things."

It wasn't just that Cannon County misfired to the tune of less than 50 percent, but it also was when the Lionettes missed. They were just 8-of-16 in the fourth quarter.

MTSU signee Abbey Sissom and Madison Walkup led the Lionettes with 16 points each and earned a spot on the Region 4-AA All-Tournament team. They were joined on the all-region team by Erin McReynolds and reserve Autumn King, who came off of the bench and provided a spark with seven points, five rebounds and two blocked shots. McReynolds finished with five points.

Macy Clements finished with four points and seven rebounds, and Kelli Davis added three points for the Lionettes.
The game title game was a showdown of two of the state's Top 10 teams with Cannon County coming in second and Livingston Academy ranked 10th. The District 8-AA championship game rematch lived up to the billing as the teams were nip-and-tuck in front of a packed house at Sewell Gymnasium.

"Every time you play (Livingston Academy) it is usually going to be that type of game," Dodgen said. "We made a run in the first half. They made a run in the third quarter. It was a mirror image of the district tournament (in reverse)."
Cannon County had erased a 49-44 Livingston Academy fourth-quarter lead with a 5-0 run that featured a field goal from Sissom and free throws from McReynolds and Walkup.

The Lionettes led 54-53 after Sissom connected for a free-throw with 46 seconds remaining, but tournament MVP Rachel Reeder hit four free throws in the final 34 seconds and Sissom's potential game-tying 3-pointer at the buzzer was off the mark.