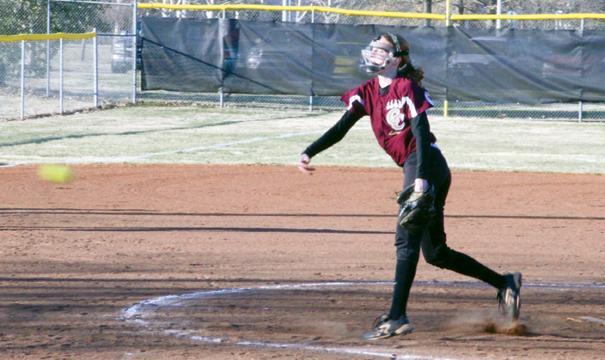 Livia Walker, a sophomore first baseman and Dorinda's daughter, played a key role in providing mom with her first career victory as the Lionettes' coach. In fact, the Lionettes (2-1) secured two victories in the same day as they won a doubleheader from Community, 7-4 and 2-0 at Cannon County Friday (March 14).

Walker was 4-for-6 with a triple, double, three RBI and one run scored in the doubleheader sweep.
"It just feels great to get the wins for the girls," Coach Walker said. "They have worked hard and this was a good opening week for us."

In addition to Walker's outstanding day, several Lionettes performed admirably in the sweep. Kristen Hale was 4-for-4 at the plate and earned the victory in the opening game of the twinbill. Macy Williams and Kallie McCrary also had multi-hit games for the Lionettes.

Trailing 4-1 entering the bottom of the fourth the Lionettes exploded for six runs to turn the game in their favor. The big blow was Walker's triple.

Cheyenne Fann started the inning with a double. Kelsie Smith and Macy Clements followed with back-to-back doubles to cut the lead to 4-3. Macy Williams singled and Hale was hit by a pitch to load the bases, bringing Walker to the plate.

She uncorked a bases-clearing triple that gave Cannon County the lead for good.

Walker finished the game 2-for-3 with a triple and single. Hale, Macy Williams and Kallie McCrary also had two hits each in the first Community game. Hale earned the win, allowing four runs over five innings. She struck out six and surrendered five hits.

The nightcap was more of a pitcher's duel with Jessica Elmy on the mound for the Lionettes. Elmy was outstanding as she went the distance and earned the shutout. Elmy scattered five hits, struck out four and walked one. Control and keeping batters at her mercy was key as Elmy threw first-pitch strikes to 12 of the 21 batters she faced.

Walker and Hale led the Lionettes at the plate. Hale was 2-for-2 with a walk and run scored, and Walker continued her strong start to the season with a 2-for-3 effort, including a double. Walker has seven hits in three games, including a home run, triple and double.

Cannon County provided Elmy all the run support she would need in the first inning when Hale singled and later came around to score on Fann's clutch, two-out single to give the Lionettes a 1-0 lead.

The Lionettes added a solo run in the third when Molly Williams walked and came around to score on McCrary's double.