Lionettes, Lions Bid To Be In Sweet 16 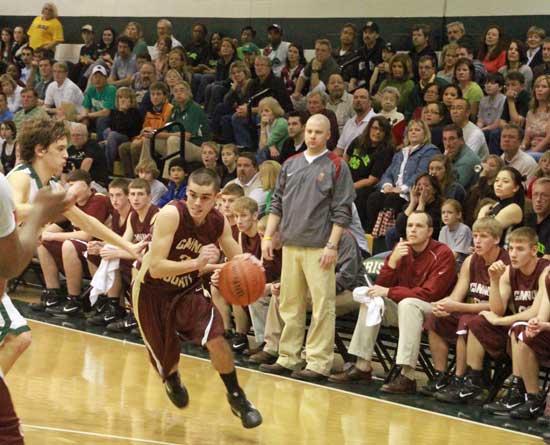 Lions senior point guard Justin Davenport was 18-of-18 from the free-throw line to help lead Cannon County to a 73-59 overtime win against Notre Dame in the first round of the Region 4-AA Tournament Saturday. (CANDICE JONES photo).
Lauren Ruehlen suffered a season-ending knee injury that cost her a chance to play a role in Cannon County's postseason run to the TSSAA Class AA Sectional in 2010, and a preseason setback left in question her status for this season.

Ruehlen did return, midway through the season, and she was reminded of why all the rehab to get back was worth it in Cannon County's 73-44 win against Sequatchie County in the first round of the Region 4-AA Tournament Friday. Ruehlen scored nine points on 4-of-6 shooting and had five rebounds.

"Just to know you can be a part of it your last year playing is a great feeling," Ruehlen said. "When you sit on the sideline and watch the team play without you, it hurts. I'm just happy to be able to be out there sharing this with my teammates. It's a great feeling."

DOWN TO 32: The field of girls and boys basketball teams still vying for the Class AA state championship has been cut to 32, respectively, and it will be narrowed to the Sweet 16 by the end of Tuesday evening.

Both of Cannon County's teams are among those still chasing the dream of winning the 2011 TSSAA Class AA State Championship.

The No. 8-ranked Lionettes (26-7) will face Grundy County (21-6) in the Region 4-AA semifinals at White County High School in Sparta Monday at 6 p.m., and the Lions (21-12) will face rival DeKalb County in semifinal action Tuesday at 6 p.m.

"These first two region games are elimination games and we survived the first one," Lionettes Head Coach Michael Dodgen said. "I feel like we are playing good basketball and we are playing with a lot of confidence. This is the time of year you want to be doing those things."

Cannon County's boys swept DeKalb County during the regular season but the Lions realize the upcoming game against the Tigers is the only one that matters this season.

"We didn't have a preference of who we played," District 8-AA Player of the Year Justin Davenport said. "We don't care who we play because you have to go out there and execute no matter who you play."

SHE'S NO ROOKIE: District 8-AA Freshman of the Year Abbey Sissom has been solid through the 2011 postseason. She was named to the All-District 8-AA Tournament team last week and she was 4-of-5 from the field for 13 points and three assists in the Region 4-AA opener.

"Abbey is a freshman but she's not playing like one," Dodgen said. "She's a sophomore experience wise from this year. She is playing really well."

RECORD SETTER: Davenport set the single-game record for consecutive free throws made with 18 in Cannon County's 73-59 overtime win against Notre Dame in the Region 4-AA opener. He was 18-of-18 in the game.

While the feat in itself is impressive, the pressure under which Davenport connected for each makes the accomplishment even more noteworthy.

The senior standout connected for all 18 in the final 2:44 of regulation and overtime. Each time Davenport stepped to the line, Notre Dame had previously trimmed the lead to either four or three points.

Each time Davenport pushed it back to five or six.

Cody Ruehlen also was outstanding from the line in the win. Ruehlen was 7-of-8 with all seven makes coming in the final 50 seconds of regulation.

KING CROWNED: Lionette senior Taylor King became the 21st member of the program's 1,000-point club when she drained a long 3-pointer to give her team a 32-11 lead over Sequatchie County with 1:08 remaining in the first half of the Region 4-AA opener.

King entered the game needing 10 points to reach the milestone and hit her first four shots, including two rare 3-pointers. She finished with 12 points and six rebounds.

"It is a good feeling to reach 1,000 points but I could not have done it without my team," King said. "They are so good and without them I wouldn't have those points. I see it as a team honor."

SIXTH MAN: Cannon County's fans have been outstanding all season but they are taking their support to an even higher level in the postseason. After making the trip back and forth to Sparta in large numbers for last week's District 8-AA Tournament, fans packed Robert A. Harris Gymnasium for the Lionettes' Region 4-AA opener Friday, and then had more representation than host Notre Dame for the Lions' first-round game in Chattanooga Saturday.

Print
Members Opinions:
jar2h
[Delete]
On the radio, it sounds like the refs are from the mountain