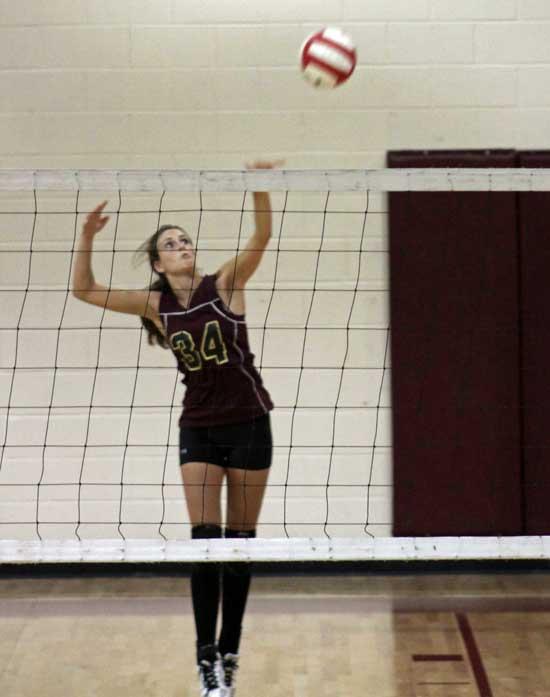 Senior Katlyn Currie serves during game 3 against Coffee County. The Lionettes lost the opener 3-1.
Cannon County's volleyball team opened the 2010 season with a 3-1 (11-25, 25-19, 20-25, 16-25) setback against Coffee County at Harris Gymnasium but the competitiveness of the match against the generally strong visitors from Manchester signaled the potential of a promising campaign for the Lionettes.

Cannon County had tied the match heading into the pivotal third game but Coffee County's late blitz enabled it to take the swing game with a 25-20 tally and clinch the match with a 25-16 result in the fourth game. The Lionettes won the second game 25-19 after falling 25-11 in the first.

"We would have liked a different result, sure, but we were competitive and we had opportunities," said Sila Kailiponi, Cannon County's Head Volleyball Coach. "I feel confident in this year's team. They stepped up at times today and, overall, it's a good way for us to start. We have to grow from this and improve in some areas but there were positives."

Emily Faulkner's play at the net was one. The senior blocker was outstanding in front of the home crowd and led several charges the kept Cannon County within striking distance throughout the match. Katlyn Currie and Whitney Alexander also had impressive matches. In fact, Currie's serving in game 2 was crucial in the Lionettes' only win of the four games.

Cannon County also displayed a flash of the future with youngsters Macey Williams and Rebekah Faulkner seeing ample action with the varsity.

"We will continue to look at some different combinations as we play early this season," Kailiponi said. "We have some different players who already are showing they can step in and help our team. I'm encouraged by what I see early."

The Lionettes put a scare into Coffee County and flirted with pushing the match to a decisive fifth game. Trailing 2-1, Cannon County had the must-win fourth game tied 9-9, before Coffee County put together a 5-1 run to swing the game - and match - in its favor.