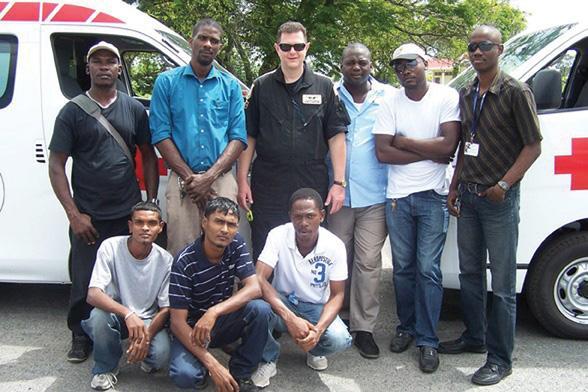 Bell, chairman of the Cannon County Homeland Security Committee, spent the week helping the country of Guyana implement its first emergency medical services (EMS) system. Located on the Atlantic Coast, Guyana has a population of approximately 750,000 and is the only English-speaking country in South America.

A previously established relationship between the Guyana Health Ministry through the Georgetown Public Hospital Corp. (GPHC) and Vanderbilt's Department of Emergency Medicine prompted the request for the training and operational assistance.

Shannon Langston, M.D., instructor in Emergency Medicine for Vanderbilt's Department of Emergency Medicine, recently taught 21 Guyanese an emergency medical technician course as part of the newly formed Guyana EMS. Langston, along with others from Vanderbilt, has been working to establish the new program.

"As part of the planning for the emergency residency program, a well-trained EMS system was the next step in building a country-wide ambulance response program," Langston said. "We reached out to LifeFlight to help bring their ground EMS knowledge to the pilot program in Georgetown, Guyana."

The Guyana Ministry of Health purchased seven new ambulances to distribute to nine regions of the country. GPHC was awarded two ambulances for use in Georgetown. The ambulance service is projected to begin operation this month. Zulfikar Bux, M.D., head of the Department of Accident and Emergency for GPHC, will serve as the medical director for the EMS response team, and Ron Morris, R.N., EMT, has been selected as its first EMS director.

Bell spent the week teaching them how to drive the new ambulances with a course in Emergency Vehicle Operations.

"The long-term goal is to implement EMS across the entire country. Vanderbilt Emergency Medicine and Vanderbilt LifeFlight will play an important role to ensure that training can be done locally once the initial phase of system has begun operations," said Bell."We're honored to be able to work with such a dedicated group that is committed to making their community safer," Gray added.