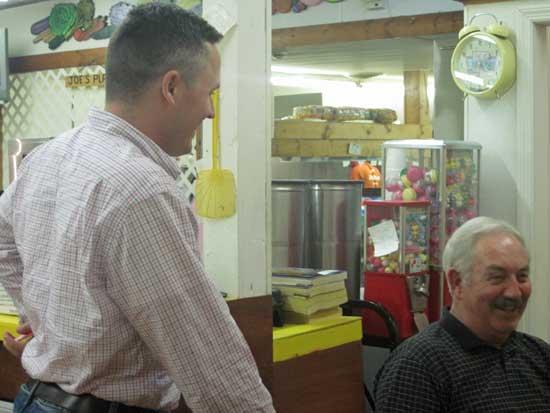 Congressional candidate Ben Leming, left, speaks with a customer at Joe's Place Saturday.
Ben Leming isn’t wasting any time getting to know voters in the 6th Congressional District. Leming, a Democrat vying to become the next congressman from the 6th District, toured all 15 counties in the district on his first official day of campaigning beginning at 12:01 a.m. Ben started his campaign by delivering an address to a group of friends, family, and supporters in his hometown of Murfreesboro.

Leming visited with patrons and staff at Joe's Place in Woodbury at around 6:00 p.m. on Saturday. Leming shook hands with some residents eating dinner and told them about himself and why he is running to represent the 6th District in Congress. Leming said, "I am here to lead. I am here to serve. And I am here to win."

Leming, an Iraq War helicopter combat veteran, Marine Captain and Naval Academy graduate, says that although he’s completed his military service he considers the chance to serve in Congress as another form of public service to the country. “It’s time to start acting with a fresh perspective.”

Ben could not campaign earlier due to his active duty service in the Marines.

Ben’s campaign theme is “mission first, politics last.” “In the marines I learned to take action with honor, courage, and commitment. In Washington my mission will be to create jobs, reform Wall Street, and bring integrity back to government. ”

Voters can learn more about Ben and his candidacy by visiting his campaign website at http://www.benleming.com.