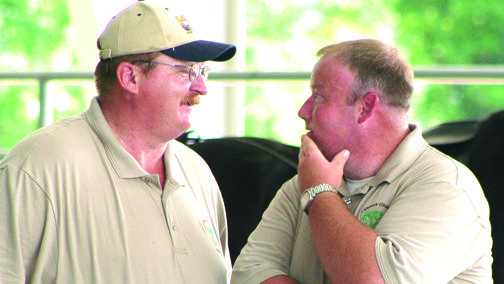 Some dozen years ago, Heath Nokes stepped into a new career position.

"During the fall of 2001, I thought my life had been turned upside down; due to a budget crisis, I had my position as 4-H Agent had been eliminated. I never dreamed what was to follow would be the greatest of blessings," Nokes said.

At that time, Heath, a Warren County native, had been working as a 4-H agricultural agent in Moore County. He began to scramble, looking for a new job.

"As I prepared resumes and completed the other tasks that is required of one seeking employment, I met Bruce Steelman, and was introduced to the Cannon County Extension Staff. As I was hired and began a new phase of my career, I soon realized that a budget cut would turn out to be a great thing," Nokes said.

"Due to the retirement of John Basinger, Cannon County was the perfect fit. Living close by in Warren County along with the strong ties to Cannon County, he began the next phase of his career in Woodbury," said Steel-man, Cannon County extension agent.

Recently, Heath was presented with a tough decision.

Warren County Extension Agent Mark Halcomb was retiring after 37.5 years and Nokes was offered the job. After a good deal of thought, he accepted it.

Heath transferred to Warren County on July 1, 2013, trading his 17 years of experience of youth work in Moore and Cannon counties to adult agriculture, Steelman said.

"Charlie Bowmen recen-tly referred to him as the new Warren County Hank Kemble (Green Acres TV show reference to County Agent). We will all miss his wit, funny stories and especially the commit-ment he gave to Extension, County and especially the youth," Steelman said.

"The staff of the Cannon County UT Extension sends heart-felt congrat-ulations to Heath on his new career path and wishes him the best of luck. Luckily, he transferred just a few miles and don't be surprised to see him in his new role in joint events between the two counties. If you would like to drop him an e-mail, his address is hnokes@utk.edu," he continued.

Nokes has a lot to show for his 17 year career. His accomplishments include the "Down on the Farm" for the County's 4th graders, "Fitting it Together" for the teenagers at risk, Young Farmers and Ranchers, 4-H All Stars and Honor Club, 4-H Goat Project, 4-H Chicken Chair, Middle Tennessee Electric Demonstrations, participation in Academic Conference and Roundup, numerous judging events to name a few.

"He always puts the kids' interest as a priority, spending countless hours at camps, competitions, club meetings as well as state activities. He truly has a gift connecting, mentoring and working with youth. I can testify to this attribute due to the positive influence he had on my two sons Charles and Paul," Steelman said.

Nokes reflected on his years in Cannon County.

"Over those 12 years, I took in the youth, parents, and people into my heart as they took me into theirs. I have had the good fortune to work with thousands of youth over the course of the years and have enjoyed each and every moment," he said.

"I have never witnessed such cooperative attitudes between such organizations as the Cannon County Farm Bureau, Woodbury Farmers Cooperative, and many others we strived annually to teach each 4th grader the importance of Agriculture," Nokes said.

"I have thoroughly enjoyed working with the Cannon County School System as they embraced, supported, and helped with 4-H programming in each 4th through 8th grade classroom. Finally, I have thoroughly enjoyed each and every moment of working as part of a great Extension Team, it is my dream that the community continue to embrace and support both the programs and staff," he continued.

" Now as I depart I can also take comfort in saying that I have had the privilege and good fortune to have observed and worked with Bruce Steelman; one of those unique individuals who tirelessly gives of himself and will not rest until those who needs his help have been helped."

"To Cannon County, I say thank you for letting me be a small part of your lives and community, as I change roles and report to Warren County I will always have a warm spot in my heart for everyone and wish everyone the best, and please support the 4-H program and new person as you have supported me. May God bless each and every one of you," Nokes concluded.