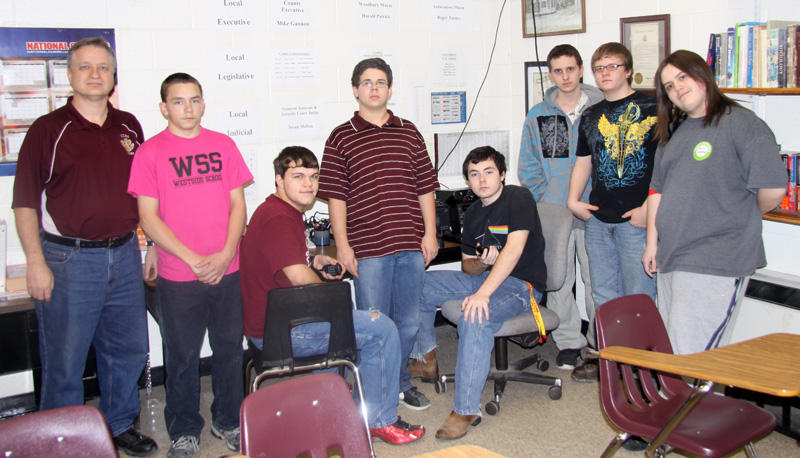 Students at Cannon County High School are corresponding worldwide and sharpening their communication skills and knowledge of technology in the process.

The CCHS Amateur Radio Club is providing students an avenue to not only belong to a worthwhile club, but also serve as a teaching tool. The club's advisor is William F. Curtis.

Since the club originated in August, students have had conversations with other Ham radio operators in France, Germany and Israel, among others, as well as throughout the Midstate.

"Students are getting an early start in communications and they are getting skills we teach here at school," Curtis said. "As far as math, they have to know Ohms Law and how to utilize math in that. They learn physics as far with propagation and how far a radio wave will travel. They learn English because you have to understand how to speak properly on there. They have to be licensed by a U.S. Government agency, the FCC, so that is social studies and, of course, foreign language."

The FCC requires Ham radio operators to display knowledge and understanding of key concepts. This is usually done by passing an exam; however some authorities also recognize certain educational or professional qualifications. Prospective amateur radio operators are examined on understanding of the key concepts of electronics, radio equipment, antennas, radio propagation, RF safety, and the radio regulations of the government granting the license.

CCHS junior James Young recently passes his test and has a FCC license. His call sign is KK4GBO.

"I have learned a lot about communications and technology through this club," Young said. "It is a great hobby if you want to go into communications and you can learn to communicate with people all over the world. I am going into the Marines so I figures this would help with my military career."

"I love technology and the more I learned about Ham radio the more I loved it," Bolden said. "I was the first member so I started talking to others to get them involved and we have continued to grow."

Curtis said donations of equipment have helped the club make great strides during this school year.

"The DeKalb County - Cannon County Amateur Radio Club gave us two power supplies," Curtis said. "The Short Mountain Repeater Club gave us a two-meter radio. We then applied for a license and obtained that through the FCC. We started talking to people all over Middle Tennessee at that point."

"This club has opened doors I didn't even know were there," Cruz Ray said. "I have gained experience and have had to sharpen skills so it's been worthwhile. We are fortunate to have this opportunity."