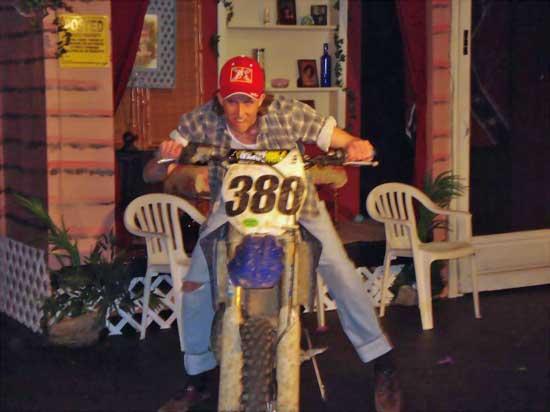 Sean Dixon as Duke in "The Great American Trailer Park Musical."
If you were in the Murfreesboro area anytime from 7 o'clock to 9 on Friday night and were frightened by continual explosive sounds followed by shrieks and screams, you needn't worry. It was just the audience at the first performance of The Great American Trailer Park Musical, all of them laughing hard enough to make a swig of Wild Turkey come out their noses.

A wildly funny and tart-tongued book, a clever score with just the right amount of twang and an exceptional cast, all of whom seem to be having a blast in this colorful and frisky production of rowdy, fast-paced musical comedy hog heaven.

David Nehls (score) and Betsy Kelso (book) have set their tuneful domestic melodrama in a North Florida trailer park, where having your baby kidnapped isn't half as tragic as getting a bad perm. Both horrors have befallen Jeannie (Carol Hamby), who's developed a severe case of agoraphobia and finds comfort spending her days lounging on the couch watching the guests on Oprah, Rickie and Montel prove that there are worse lives than hers. Her husband Norbert (Steven Luster), frustrated with having a wife who won't go further outside than as far as she can while keeping one hand on the door knob, has taken to spending his nights at the local strip club, where he becomes smitten with exotic dancer Pippi (Deanna Payne) who, rather conveniently, has just moved into the trailer across the yard.

This is an OUT FRONT PRODUCTION and contains adult language.