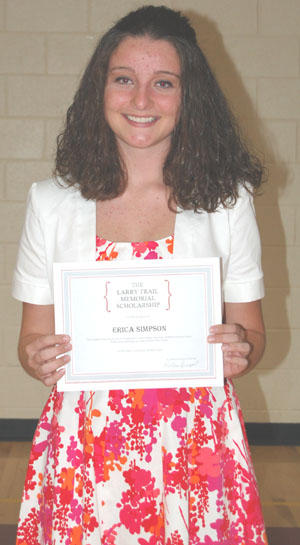 Class of 1970 representative, Kathleen Pack Davenport, presented the award of $1000.00
to Erica S. Simpson of 1615 Preacher Spry Road, Bradyville, Tennessee. She is the daughter of Eric and Sherry Simpson.

While at CCHS, Erica was active in The Beta Club, Math Club, Spanish Club, and the Art Club. She also was involved in Business Systems Technology at Tennessee Technological University for 120 hours during the summer.

As a student at CCHS, she worked at a daycare and in a medical office performing a variety of tasks which included doctor’s coding, registering patients, assisting patients with co-pay issues, and scheduling appointments. She also volunteered an entire summer to teach reading to a Jamaican boy at Vanderbilt Hospital suffering from Osteogenesis Imperfecta, a degenerative bone disease.

At Leoni Church of Christ, she has participated in the Bible Bowl for eight years and served as a volunteer to take food to elderly widows and widowers.

At the awards ceremony, Erica also received the DTC Scholarship, Accounting Award and a Lottery Scholarship.

Erica plans to attend MTSU where she plans to study to become a registered nurse. She stated in her essay that as a nurse, she would be able to assist people in Cannon
County who may have a medical emergency whether in a store, restaurant or on a
highway. She further said that her heart’s desire is to be able to associate and interact with people of all age groups.

The scholarship is awarded annually to a deserving high school senior who plans to pursue a college degree. In order to be considered for this award, the recipient must be a
Student graduating from Cannon County High School with a GPA of 3.5 or higher who
has been accepted for admission by an accredited college or university. The candidate
must submit an application and test results from the ACT and/or SAT.

It must also be accompanied by a 500-700 word essay, which explains why he or she deserves
this scholarship and how winning it could benefit the Cannon County community. Additionally, a proof of acceptance letter from the college or university the student plans to attend must be included with the application.

The Woodbury High School Class of 1970 established the scholarship fund in memory of Class member Larry Trail who passed away August 21, 2006. Members of the class of 1970 are asked to contribute to the fund each year.

Because Larry’s work in the community was so well known and appreciated, the fund is open to contributions from anyone who desires to contribute. All checks should be sent to CCHS, One Lion Drive, Woodbury, Tennessee 37190. Each check should have the designation – Larry Trail Scholarship.