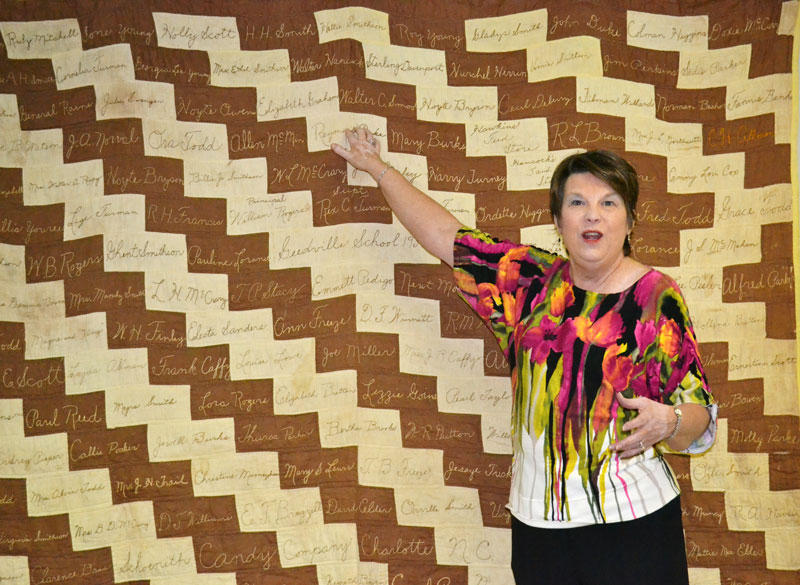 Geedville Community leader Beecher Bowen and his wife Ruby were provided tribute at the March meeting of the Cannon County Historical Society (CCHS). A man of humble beginnings from the Geedville Community, he and his teacher wife Ruby, became two of the most revered educators of their era. A book of Beecher Bowens’ poetry and selected writings has recently been published by Friends of the Library.

Dell Harrell, nice of Beecher Bowen, stated he fulfilled his mother’s dream by obtaining an education and choosing a teaching career. He and his wife Ruby taught school in Cannon County from 1942 through 1955. They inspired their students to learn through discipline and dedication to best effort.

Raymond Cooper, former elementary student at Woodland, stated he was denied an opportunity to take freshman  high school algebra  since he was from a rural county school and deemed inadequately prepared. “When Mr. Beecher learned of this situation, he immediate arranged a change in my class schedule to include algebra. I did real well and went on to major in math. In addition, Mr. Beecher taught me a deep appreciation for history and I have enjoyed travel throughout the USA to visit historic places.”

Charles (Charlie) Bowman shared the disciplinarian side of Ms. Ruby Bowen. She had a rocking chair in her first-grade classroom at Woodland School where she would rock a home sick child. However, she strictly enforced school rules. Neither Charlie nor his classmate Samuel Powell will forget the spanking they received for misbehaving in the school lunchroom by kicking each other under the table. “There was this saying around Woodland School that if Mr. Beecher could not make you cry, he would send you to Ms. Rudy,” laughed Charlie. “The Bowens were tender- hearted towards children but also demanded respect and order.”

Mr. Beecher Bowen was principal and teacher when Joe Young entered the 8th grade. Joe said that every school day started with the “Pledge of Allegiance” and a prayer. Before going to lunch, someone offered grace or a blessing. “What a contrast to today’s schools where praying is outlawed.” Joe’s father Lloyd Young became a Justice of the Peace after Mr. Beecher completed his tenure as J.P. He passed down the official Cannon County Magistrate books to Joe’s father. Joe displayed a 1943 record book holding pleas and fines to minor offenses of the law by people in his district. In earlier days, Commissioners held court rather than those arrested traveling to the county seat for disposition.

Beecher Bowen was born in 1910 in a log cabin in the Geedville Community and attended Geedville School when it opened in 1922. As a fund raiser for the school in 1939-40, quilt blocks were sold for 10 cents each. Janet Duggin Barnes’ maternal aunt Lyda Allmon Parker won the quilt. Janet identified 165 names embroidered on the one-of-a-kind- quilt which provides a historic glimpse of the Geedville Community.

The Geedville School quilt is included in a new “Community Chest” exhibition in the cultural museum at The Arts Center of Cannon County. The exhibit features significant objects and accomplished people from Cannon County. The 1939-40 Geedville School quilt can be seen and studied more closely by visiting the Arts Center exhibit currently showing in Woodbury.

Charlie Harrell and Russell Thomas also shared some of their fond memories of Mr. Beecher and Miss Ruby Bowen. The couple positively impacted the lives of thousands of Cannon County school children blessed from their shared wisdom and appreciation for education. The next meeting of the CCHS will be held in May with guest speaker Danny Nichols.