Drought Conditions May Be Present Throughout Winter 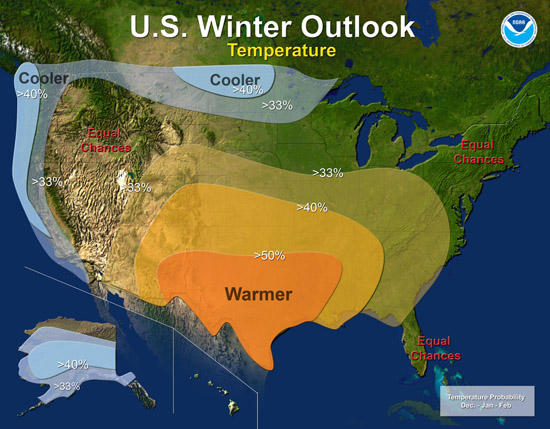 Most of the South and Southeast will be warmer and drier than average through February 2011, according to the annual Winter Outlook released Thursday by NOAA’s Climate Prediction Center.

A moderate to strong La Niña will be the dominant climate factor influencing weather across most of the U.S. this winter.

La Niña is associated with cooler than normal water temperatures in the Equatorial Pacific Ocean, unlike El Niño which is associated with warmer than normal water temperatures. Both of these climate phenomena, which typically occur every 2-5 years, influence weather patterns throughout the world and often lead to extreme weather events. Last winter’s El Niño contributed to record-breaking rain and snowfall leading to severe flooding in some parts of the country, with record heat and drought in other parts of the country. Although La Niña is the opposite of El Niño, it also has the potential to bring weather extremes to parts of the nation.

“La Niña is in place and will strengthen and persist through the winter months, giving us a better understanding of what to expect between December and February,” said Mike Halpert, deputy director of the Climate Prediction Center – a division of the National Weather Service. “This is a good time for people to review the outlook and begin preparing for what winter may have in store.”

“Other climate factors will play a role in the winter weather at times across the country,” added Halpert. “Some of these factors, such as the North Atlantic Oscillation, are difficult to predict more than one to two weeks in advance. The NAO adds uncertainty to the forecast in the Northeast and Mid-Atlantic portions of the country.”

•Southern Plains, Gulf Coast States & Southeast: warmer and drier than average. This will likely exacerbate drought conditions in these areas. All southern states are at risk of having above normal wildfire conditions starting this winter and lasting into the spring;

•Ohio and Tennessee Valleys: warmer and wetter than average. Likely to see increased storminess and flooding;

•Pacific Northwest:  colder and wetter than average. La Niña often brings lower than average temperatures and increased mountain snow to the Pacific Northwest and western Montana during the winter months, which is good for the replenishment of water resources and winter recreation but can also lead to greater flooding and avalanche concerns;

•Southwest: warmer and drier than average. This will likely exacerbate drought conditions in these areas. All southern states are at risk of having above normal wildfire conditions starting this winter and lasting into the spring;

•Florida: drier than average, with an equal chance for above-, near-, or below-normal temperatures. Above normal wildfire conditions;

•Northeast and Mid-Atlantic: equal chances for above-, near-, or below-normal temperatures and precipitation. Winter weather for these regions is often driven not by La Niña but by weather patterns over the northern Atlantic Ocean and Arctic. These are often more short-term, and are generally predictable only a week or so in advance. If enough cold air and moisture are in place, areas north of the Ohio Valley and into the Northeast could see above-average snow;

•Hawaii: drier than normal through November, then wetter than normal December through February. Statewide, the current drought is expected to continue through the winter, with several locations remaining on track to become the driest year on record. Drought recovery is more likely on the smaller islands of Kauai and Molokai, and over the windward slopes of the Big Island and Maui;

•Alaska: odds favor colder than average temperatures with equal chances of above or below normal precipitation. The interior and southern portions of the state are currently drier than normal. A dry winter may set Alaska up for a greater chance of above normal wildfire conditions in the spring.

This seasonal outlook does not project where and when snowstorms may hit or total seasonal snowfall accumulations. Snow forecasts are dependent upon winter storms, which are generally not predictable more than several days in advance.

NOAA's National Weather Service is the primary source of weather data, forecasts and warnings for the United States and its territories. NOAA’s National Weather Service operates the most advanced weather and flood warning and forecast system in the world, helping to protect lives and property and enhance the national economy. Visit us online at weather.gov and on Facebook at http://www.facebook.com/US.National.Weather.Service.gov.

NOAA understands and predicts changes in the Earth's environment, from the depths of the ocean to the surface of the sun, and conserves and manages our coastal and marine resources. Visit http://www.noaa.gov.