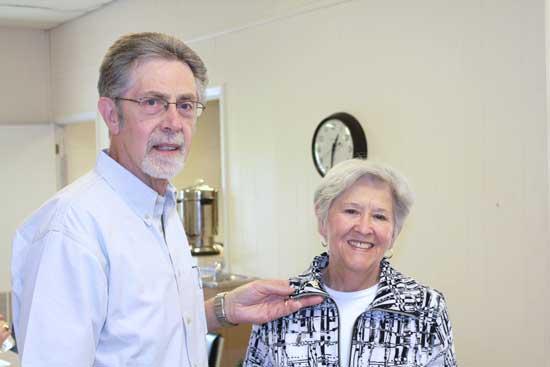 The American Red Cross Donor Appreciation Blood Drive May 19 was very rewarding for the 112 who came out to give.

87 were able to donate, of which eight gave double red cells, making a total of 95 units given on the goal of 97.

Each donor and volunteer received several door prizes from the local businesses in town.

Howard Witty donated his 168 pint, receiving a 21 gallon pin. His blood could have possibly went to 504 different people helping to save their lives.  Howard is a true hero who gives of himself so that others may have a chance to see more tomorrows.

At the end of the blood drive, tickets corresponding to the number given when signing in, were mixed together and number 102 was drawn. Randy L. Slone became the winner of a $100 Visa Gift Card.  Congratulations Randy.

The Woodbury Lions Club and the American Red Cross wishes to express a hardy "thank you" to all the local heroes who gave of themselves for others, and would like to recognize local businesses who helped make the drive a big success.