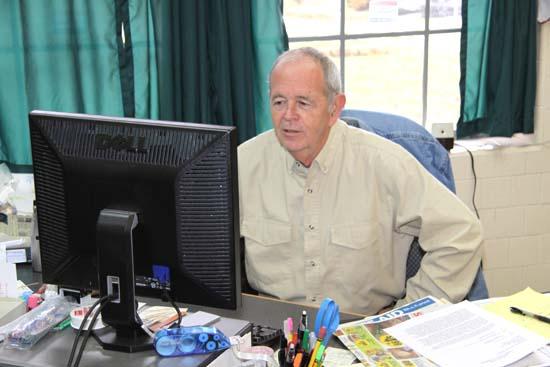 At the same time, he also issued a recommendation to those persons seeking to hold elected office in Cannon County in the August 5 General Election.

"My suggestion is that anybody running for an office in Cannon County should purchase a law book and study the portions that the election laws are in, and also look online to the state's Web site to see if there have been any changes," Dobson said.

Dobson also advised, "Please pay attention to the intent of the law. We have set guidelines on how we can operate and we must stay within those guidelines. We do not have the right to go outside of them."

Dobson was appointed to the position of Administrator of Elections last spring by the Cannon County Election Commission. His appointment to the job followed a shakeup of the election commission, during which Republicans gained the majority vote on the five-member commission and Dobson was selected to replace Lynn Bush.

He said one of the reasons candidates should make themselves aware of the laws pertaining to elections and campaigning is that the state is keeping closer track of where candidates live and their financial resources.

"All we want is to have a clean election," Dobson said. "We want to have an election that is fair to everybody, and one in which the same rules apply to everyone, both candidates and voters."

Cannon County has approximately 7,900 voters. Based on the number of persons who have requested qualify petitions to date, they will choose from a field of around 50 candidates for the various positions which are up for election in August.

"It's going to be a large election, and people need to remember certain things," Dobson said. "There's new state laws that tell them (candidates) what they can and can't do. One of the things is putting out signs. When they put up signs during an election, they must take down the signs after the election. That's whether they are elected or not."

Offices up for election this year include county executive, sheriff, trustee, register of deeds, county court clerk and circuit court clerk. All 10 seats on the county commission are also up for election, as are the school board seats in District 2 and District 5. Three road commissioners and five constables will also be selected.

When voting for county commission, school board and road commission, voters can only choose candidates who are running in the district or zone in which they live. For example, a person living in District 1 can only vote for a county commissioner who is running for one of the two seats within that district.

Dobson's background includes owning and operating a trucking company and farming, and he had to go through extensive training after being named to the position.

"People who are hired as administrators must go through months of training," Dobson said. "You must take tests to test what you've learned and then you must pass a certification test proving that you've retained that information.

"The emphasis of the training is to make sure you can handle an election properly and the results are afterwards you have no complaints or problems."

Dobson passed the Certification Exam for Administrators of Elections in October.

The exam is a rigorous one-day exam held at least once a year in Nashville.  By passing the exam, participants demonstrate they have the level of knowledge and understanding required to be successful county administrators of elections in Tennessee.

Dobson said that so far the process of qualify candidates has gone smoothly.

"When they come into our office the first thing we do is make sure that they themselves are registered voters in Cannon County," he said. "Then we give them a petition and instruct them to get their proper signatures on the petitions and that they get them back in time so that we have plenty of time to check them and verify the names, and we verify every name and every address.

Candidates have until April 1 at noon to turn in their petitions to be eligible to be placed on the ballot in the August election, but Dobson advises they do so as early as possible in order for the election office to verify that all of the signatures came from eligible voters.

"We will get the petitions back in, we will check them for verification on the signatures. If they have enough qualified signatures then they will be on the ballot," Dobson said.

One aspect of preparing for an election is finding and training people to work the polling places on election day, and Dobson said he does not as yet have as many people as will be needed.

"We have 50 people who have indicated they wanted to work the election and we need about 80, so we are looking for 30 to 40 more. We would like to have them early so that when we do our training sessions about 60 days before the election they are all there."

Dobson said one of the goals of the Tennessee Election Commission is to have uniformity across the state this year in how elections are run.

"The new training procedures are to make sure that every county operates within the same guidelines. We do not have any gray areas. If it doesn't say you can, then you can't.

"They are requiring us to do the same here as we do in the big counties like Shelby and Knox we are all supposed to be operating on the same page within the same rules," Dobson said.

The election office can be reached online at http://cannoncountyelection.blogspot.com/

Print
Members Opinions:
Leatherneck
[Delete]
The Election Commission earnestly seeks sincere suggestions or ideas from our Cannon County Voters about problems or concerns that Voters may have experienced in previous election cycles, such as;

b.) understanding the Ballots and how to
make your choice clearly. Note: Sample
Ballots will always be posted at each
polling site and in local media sources
prior to each election.

c.) understanding the MicroVote Infinity
Voting Machine. You can view a video
at(http://www.microvote.com/infmovie.htm)

Please know that our Right to Vote in Free and Open Election Processes has come about by the service and sacrifices of countless Patriotic Military Service Men and Women. We can honor them by remembering their service and by casting informed and meaningful votes in each election cycle!

Let's all work together to insure fair, honest and transparent elections.