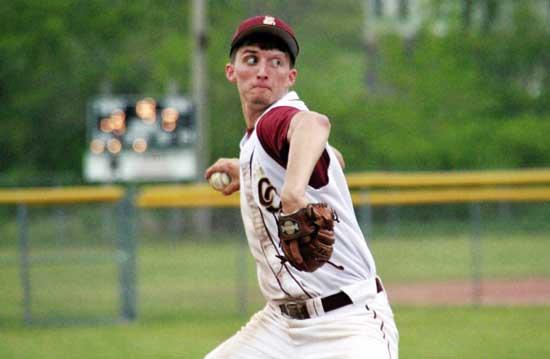 Pitcher Trent Fagan pitched a complete game to earn the win against Livingston Academy in game one of their two-game series. (CANDICE JONES photos).

Cannon County's baseball team broke out the broom for a little Spring cleaning and swept District 8-AA rival Livingston Academy in a two-game series to clinch a first-round home game in the league's postseason tournament.

"The team has been playing well and showing improvement through the district schedule," Cannon County Head Baseball Coach Eddie Cunningham said. "It was big to get that first-round game at home. I like the way we are playing and we just need to continue working to improve with the tournament around the corner."

Senior righty Trent Fagan canvased another masterpiece in the series opener. Fagan was efficient as he scattered eight hits, struck out four and walked one. He allowed just two earned runs in the complete-game effort.

"Trent has been solid during  this run and when he's on the mound we have been tough to beat," Cunningham said. "He had another solid game to get us off to a good start in the series against Livingston Academy."

Fagan dominated the Wildcats early when he blanked them for the first five innings.

Clutch hits were a premium. Sophomore shortstop Austin Brown continued his sterling season, going 2-for-4 with a double and four RBI, and was the only Lion with a multi-hit game. Cody Phillips; however, staggered the Wildcats early with his two-run, first-inning blast to stake the Lions to an early 2-0 lead.

Colin Jones was 1-for-4 with a double, Fagan was 1-for-3 and Dalton Bell was 1-for-2 with one RBI and one run scored.

The Lions pounced on the Wildcats from the outset, following Phillips' two-run jolt with a three-run second to build a 5-0 lead. Back-to-back two-out doubles from Jones and Brown keyed the three-run uprising.

Livingston Academy closed to within one run, 5-4, with a four-run sixth, but the Lions tackled on two insurance runs in the bottom of the inning and took the win.

Hitting was the order of the day as Cannon County pounded out 23 hits and rolled to a 14-7 win at Livingston Academy to sweep the season series.

Austin Brown, Cody Phillips and Dalton Bell each had four hits and Colin Jones had three. Seven Lions had multi-hit games. Brown raised his team-best batting average to .500 with a 4-for-5 effort, driving in three runs and scoring three more.

Phillips continued his torrid pace, going 4-for-5 with two RBI and two run scored; Bell was 4-for-4 with four runs scored. Jones continued to set the pace at the leadoff spot, going 3-for-5 with a double, three RBI and three runs scored. Chase Gunter (2-for-4), Cody Lorance (2-for-5, two RBI) and Austin Parker (2-for-4) also had multi-hit games for the Lions. Trent Fagan was 1-for-4 with a double and three RBI.

Brock Francis went the distance on the mound to notch the win.