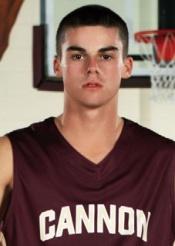 JUSTIN DAVENPORT
Justin Davenport put together one of the most dynamic seasons of any Cannon County boys basketball in 2010-11.

Davenport’s sensational play also put him in elite company amongst the state’s top performers when he was named to the Tennessee Sports Writers Class AA All-State team.

Davenport, who became just the second player in program history to earn District 8-AA Player of the Year in 2011, averaged 21.6 points, 3.8 rebounds, 3.6 assists and he shot 45 percent from the field, 43 percent from 3-point range and 89 percent from the free-throw line.

He was one of three District 8-AA players to make the All-State team, joining Mason Ramsey and Logan Ramsey, of Livingston Academy.

“It is an honor to make the All-State team and this is something I never expected,” Davenport said. “There are so many great players across the state so to be mentioned as one of them is an honor. The biggest reason I made this is because of our team success. Most players that make the team either are on winning teams or are just crazy good. Our team did great things this season.”

Davenport, who will continue his playing career at Maryville College in Maryville, Tenn., helped lead them.

The Lions’ 22 wins in 2010-11 were one shy of tying the school record. The 22 wins represented the first 20-win season for Cannon County since 2000. The Lions also reached the Class AA Substate for the first time since 2000.

“This is great recognition to Justin and our basketball program,” Cannon County Head Boys Basketball Coach Matt Rigsby said. “To be named All-State puts you in elite company for that season, and Justin is deserving of that status for not only the season he produced, but also what it meant to our team success.”

Davenport torched the nets for 40 points in a win against Forrest and had four games of 30 or more points during his season season. During one five-game stretch, Davenport scored 37, 32, 40, 21 and 34, respectively. He netted double figures in all 36 games the Lions played.

Davenport capped his career as the all-time leading scorer in Lions basketball history with 1,719 points - 259 more than the previous mark of 1,460.

Print
Members Opinions:
redbird
[Delete]
We have watched this young man grow into a fine young man. I know his grandparents are very proud of him, and so are we. We want to congratulate him on a job well done, and hope he continues to have a wonderful future no matter what his goals are.We wish him many blessings to come.
Sarah
[Delete]
Justin
Jubba and I are so very proud of you and all those YEARS of practice since you were 5 years old on your home basketball court has paid off......just be yourself and do what you do best at Maryville......love you much Justin......your neighbors Jubba & Sarah