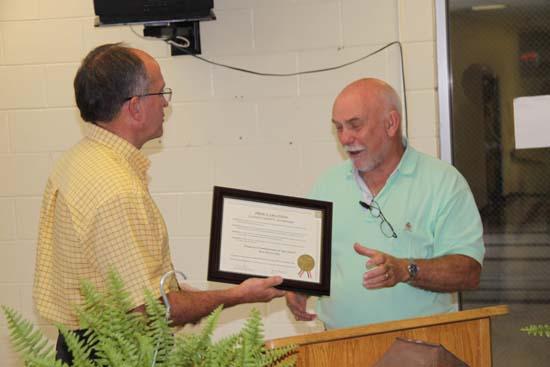 Cannon County officially has been awarded a $150,000 Tennessee Agriculture Enhancement grant for the purpose of building an Agriculture Learning Center, state and local officials announced during a kickoff at Cannon County High School Thursday.

"Education is the core to all of it," said Tennessee Agriculture Commissioner Ken Givens, who was in attendance at Cannon County High School to announce the grant and its benefits. "The Ag Learning Center was a no-brainer when it comes to figuring how we impact children and we have tremendous FFA (Future Farmers of America) programs across the state but these students need to have hands-on facilities so they can get in there and learn.

"This has been one of the most accepting communities we have dealt with ... and it looks like everybody here who touches agriculture is really excited and ready to go to work."

In addition to the $150,000 grant through the Tennessee Agricultural Enhancement Program (TAEP), Cannon County also could receive at least $50,000 in additional grant monies through the Rural Development program, Givens said.

"Cannon County is going to get $150,000 from the TAEP, that's a given," Givens said. "They may get monies from Rural Development as well. I know Rep. (Stratton) Bone has talked to the people at Rural Development and made a real good case. I know (County Executive Mike) Gannon has had conversations with Rural Development as well. If Cannon County was able to get all it could from both entities they could have upwards of $200,000 toward this project. I would challenge the community to not just build a $200,000 facility but to make it one of the best in the state and it looks like the plans are to do that here."

After challenging those in attendance to donate and step up to the plate in order to exceed the grant money and build a state-of-the-art facility, Givens made a contribution of $50 toward the project.

The Ag Learning Center will be built on the grounds of Cannon County High School in the back of the property near the area where the school's greenhouses currently are located. Initial plans are for a 80 X 200 covered, open-sided structure with an adjoining meeting room and restrooms. It will also serve as a livestock demonstration and exhibition center complete with a show ring and holding pens. It also will include a large meeting room and kitchenette.

When completed the Ag Learning Center, which can only be used for agricultural-based events, will be one of two in middle Tennessee with the other located in Trousdale County. It not only will benefit students at Cannon County High School but local farmers and members of the agricultural community at large.

"Agriculture is still the No. 1 industry in our state and it is the No. 1 industry in (Cannon County)," Bone said. "That was what was behind Agriculture Enhancement. If we could do some things to boost that industry and push it a little bit then we felt it would pay off in the long run and it has. We are seeing results. You have all these different agricultural groups and it will give them a home. Current students will have grand-children who go through this building we are talking about. It's a big benefit for everyone and we will continue to see results. We are really excited."

So are folks in Cannon County. After all, the facility will benefit citizens throughout the county. It will be available to Farm Bureau, 4-H, FFA, UT Extension and the agricultural community at large. It will also enable CCHS to host goat and sheep shows, among others.

"The way the grant was written was such that the (Ag Learning Center) is to be used for the farmer and agricultural interests," Gannon said. "They could actually have a Farmer's Market in it if they wanted to. As long as it is farm-related it can be used. It is going to be a wonderful thing and (Cannon County teachers) Bob Melton and Courtney Nichols will do a great job managing it."

Numerous citizens representing various farming groups spoke at the kickoff Thursday, thanking Givens and Bone for their assistance in securing grant money for the project in Cannon County and talked about the many benefits they believe it will provide for students and the local farming industry.

CCHS carpentry teacher Ed Coates' class will assist in build the facility and said he already sees an additional benefit most have not considered as a result of the Ag Learning Center.

"It kind of sets up a little community within the school where everybody is working together," Coates said. "We will have the Ag students working on the building and then the carpentry students will come in and assist. They are going to see the whole framework of how a business actually takes place with a contractor on site and everybody working together to get it done. It's for the community, it's for the students and it's a great thing for everyone."

TAEP is a state funded program established by Governor Phil Bredesen and supported by the General Assembly to increase farm income in Tennessee by helping farmers invest in better farming practices and by encouraging diversification and innovation.

State Rep. Stratton Bone was one of the many speakers on hand at CCHS for the announcement that the school had received a $150,000 Agriculture Enhancement Grant for the purpose of building a livestock learning center.