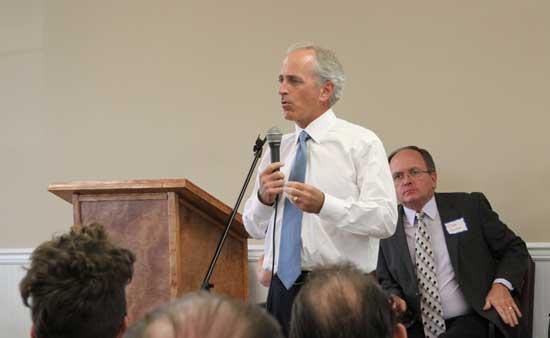 Tennessee Senator Bob Corker answers questions during a town hall meeting Tuesday at the Cannon County Senior Center. In the background is County executive Mike Gannon. (Photo by Sean Parker)
U.S. Senator Bob Corker (R-TN) discussed a number of issues Tuesday with a packed house at the Cannon County Senior Center, but the topic that was at the forefront was health care reform.

Many of the speakers who addressed Sen. Corker were in favor of a single-payer system, while about an equal number were opposed.

"Yes we need health reform. It is called responsibility," Tom Kobinsky, an opponent of a government-run system, said. "We are not guaranteed entitlements. We are guaranteed opportunities. It is not the government's responsibility to wipe my butt."

On the opposite side of the debate was James Rose, a local farmer who said he made about $8,000 a year, which is an amount equal to what he had to pay for a recent surgery.

Rose said he favored a single-payer system for health care.

Corker agreed that additional ways needed to be created for people to get health care insurance, but that "dumbing down" the current system was not the answer.

"I believe that we do need health care reform, health care insurance reform, of some sort in this nation," Corker said. About 842,000 people in Tennessee are without health care and so I see the consequences of not having insurance.

Corker said tort reform was needed to reduce the amount doctors pay in malpractice insurance, as was competition across state lines for buyers of insurance from private providers.

He said changes to the tax code were also needed to assist people in purchasing health care insurance. "If you buy your health insurance you should be able to deduct it from your taxes," he said.

"I do not think we should have a government option," he said. "What we want to do is do no harm. If people have health insurance they want to keep they should be able to.

Corker also said the country can not afford the one trillion dollar price tag it is estimated the current reform proposal would cost.

"If we do reform it has to be budget neutral and pass the common sense test," he said.