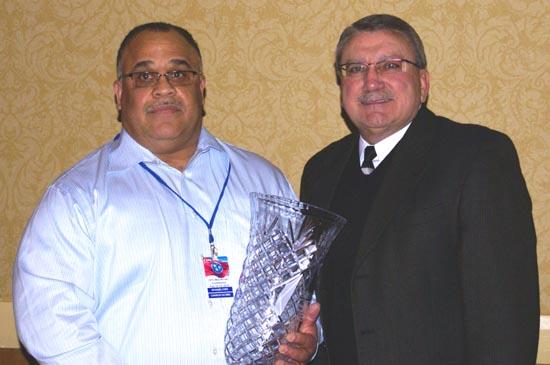 The Tommy Erwin Lifetime Achievement Award is presented annually to an individual, whose contribution to pre-hospital care has been consistent and long lasting, representing a lifetime of outstanding service to the profession and the public.

Cope, whose career as a firefighter and paramedic spans 34 years, acknowledged being taken by surprise upon learning of his nomination for the award.

"I was humbled and honored," he said.

Cope joined Arnold AFB's Fire Department in 1978. Prior to coming to Arnold, he worked full-time at the Cannon County Ambulance Service and has been their director for 27 years.

"Ricky brings competence, professionalism and a deep commitment to provide the best pre-hospital care to his patients," said Campbell, who first met Cope when the two men worked for the Woodbury Volunteer Fire Department in the late 1960s. "He is [also] very active and well respected in his community and church. I never doubted that he would receive the award. In my opinion he was the only choice. I am very glad that the TASA selection committee shared my opinion."

In the award submission to TASA, AEDC Fire Chief Daryle Lopes, who nominated Cope for the state-level award, said, "Some of Ricky's finest attributes are his quiet strength, his passion for serving others and his natural ability to provide effective leadership in any crisis or situation. I consider him the spearhead of my EMS corps, and the leader and provider everyone should and does emulate."

Lopes said Cope has continually led the way in making improvements to emergency care in both Cannon County and at AEDC. While holding down his full-time position at AEDC and a demanding full-time schedule with the county, Cope also has served two eight-year terms as mayor of Woodbury and 17 years as the community's alderman.

"Ricky also led the charge in development of new 911 protocols, radio capability and dispatch procedures for the new 911 facility. He served eight years on the Tennessee EMS Board as well."

Cope said it is important to stay up to date in his profession.

"It is a real challenge to stay current because in the medical field things change quite a bit," he acknowledged. "You always want to do the best you can for patients and hope you do."

He said regardless of their overall condition, the patients must always be treated with dignity and respect.