From WBRY and staff reports 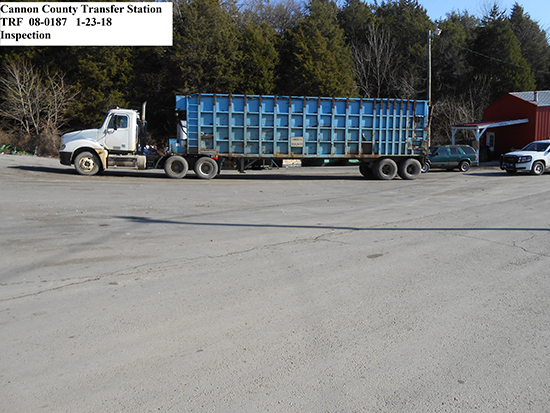 The inspection was a follow-up from the Tennessee Department of Environment and Conservation to a complaint filed on Jan. 10.

Pictures accompanied the complaint, submitted to the department by concerned citizens. The pictures showed heaping piles of garbage on the pavement of the center. The pictures were taken on Jan. 9 when the convenience center was experiencing compactor problems.

The compactor, which is nearly four decades old, had broken down the previous weekend and officials decided to keep the center open while the compactor was being repaired. Trash had to be piled up in front of the compactor on the pavement and several trips were made to haul it to the landfill in Murfreesboro.

When an inspector showed up Wednesday afternoon, they observed there was not any waste outside of the compactor.

After the closing of the convenience center on Jan. 9, the day the pictures were taken, the solid waste staff spent around five hours cleaning up the garbage and hauling it off to the landfill.

Douglas Brady of the Department of Environment and Conservation conducted the evaluation and stated in the report that the site looks good and no violations were found.

The convenience center had two major violation reports after inspections back in September. Most of the violations on both inspections dealt with the employee bathroom being out of order. There was also a water line problem that needed to be fixed in order for the bathroom to become operational again.

Also in one of the violation reports it was stated that there was waste under the compactor that needed to be removed. According to the report, it was explained that the problem stemmed from the compactor's piston compartment caused waste to fall out of the compartment to the pavement during the piston cycle.

The major violations reports were filed in September and October. A followup inspection was done in December as the bathroom was fixed and no violations were found.

The state is now aware of the issues of the compactor. County Executive Mike Gannon wrote a letter to Bryant Stephens of the Cookeville Field Office of the Department explaining the steps they are taking in order to fix this problem long term, which includes trying to obtain a grant to purchase trailers which compact garbage.