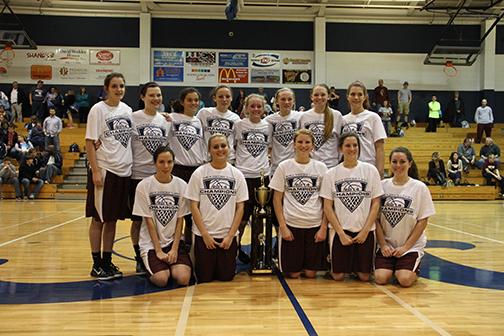 With the win, the Lionettes advance to the semifinals with one win separating them from the championship game of the Marlin Christmas Classic.

Cannon County only allowed two Archbishop, Fla. points in the third quarter as the Lionettes' 48-32 win on Tuesday earned them a bid into the Marlin Christmas Classic Championship.

With the win, head coach Michael Dodgen notched his 300th win at Cannon County while the seniors now have 100 wins since their freshman year.

Cannon County (13-3, 2-2) allowed only one basket in the third quarter to Archbishop following a Reagan McCray steal and layup with 27 seconds remaining.

The defensive effort in the third period extended the Lionettes lead to 32-18 heading into the final period.
"We moved to a zone there in the third quarter to try and limit their penetration and I don't think they adjusted to it very well," Dodgen said. "I think they still were anticipating us being in man (defense) and we weren't."

The Lions shot 18 percent (3-of-16) from beyond the arc on the game, but were able to score inside the paint with Autumn King and Kendra Maynard, a variation to the offense that Dodgen knows has to happen as the season progresses.

"I thought we adjusted really well with Autumn and Kendra giving us a little bit of an inside game there and leading us in scoring," Dodgen said. "As the seasons get on, your legs get tired, people know what you do, and you have to be able to adjust."

King finished with 17 points on 7-of-12 shooting from the floor and Maynard tallied 12.
King, spanning from the end of the third period to the start of the fourth, scored eight of the Lionettes' last 10 points as Cannon County extended its lead to 36-21.

Cannon County: Kendra Maynard 12, Erin McReynolds 6, Autumn King 17, Kelli Davis 6, Kristen Hale 7.
Archbishop: Reagan McCray 12, Monica Grimaldo 10, Julia Juriga 4, Casey Sommer 6.
Lionettes Win Marlin
After winning three games in as many days, the Cannon County Lionettes defeated Moore County, 24-22, to win the Marlin Christmas Classic championship Wednesday night in Panama City Beach, Fla.
With their largest lead of the game at 22-15 with 4:04 remaining, the Lionettes surrendered a 7-2 run to Moore County, and gave the Raiders a chance to win it with their last possession.
With less than 20 seconds remaining, Thomas misses a three from the left wing, but the Raiders would retain the possession for one last attempt. Following a Moore County timeout, the Raiders turned it over securing the victory for Cannon County.
Cannon County's (14-3, 2-2) first made field goal didn't come until 1:24 left in the first quarter after Autumn King's basket put the Lionettes ahead 4-2.
Up until then, the Lionettes turned the ball over four times in their previous nine possessions.
"To be honest, I didn't expect it to be that slow of a pace to the game considering the two types of teams," head coach Michael Dodgen said. "I thought Moore County did a good job defensively, and I thought we did a really good job defensively on them."
Following a 3-pointer from Moore County's Katie Thomas with 1:08 in the opening quarter, the Raiders did not make another field goal for the next 13 minutes, eventually ending their drought with 3:30 left in the third stanza.
"Both teams were I think a little bit on empty," Dodgen said. "I was just really pleased with the way we fought and battled defensively."
"We held (Kursten) Hawkins, who's averaging about 21, 22 (points) a game; we held her to six (points). That's big, because Kerstin Hawkins is a good player and we did a really good job on her."
After missing eight consecutive shots from beyond the arc, Kelli Davis made the Lionettes' only 3-point shot of the game with 4:27 left in regulation, keeping Cannon County's decade-long 3-point streak alive.
"We had some good looks. We didn't just knock them down," Dodgen said. "But we found other ways to score whether it be with our post players (or) our defense."
Autumn King led all scorers with 10 points. Kendra Maynard finished with six.

Trailing by three at the half, Cannon County outscored Warren County by 14 points to get a 57-52 road win on Saturday.
With the win, Cannon County (15-3, 2-2) finishes non-district play with a 13-1 record. The Lionettes, currently on a 5-game win streak, resume district play at home versus Upperman on Jan. 6.
Kendra Maynard led the Lionettes in scoring with 16 points. Erin McReynolds and Kelli Davis tallied 13 and 11 respectively.
With a 25-22 advantage for Warren County, Cannon County shot 63 percent (7-of-11) in the third period and committed zero turnovers to regain a 41-30 lead in the fourth.
Warren County outscored the Lionettes 18-10 in the second quarter.
Cannon County out shot 77 percent (21-of-27) from the charity stripe, including 10-of-14 in the final period.