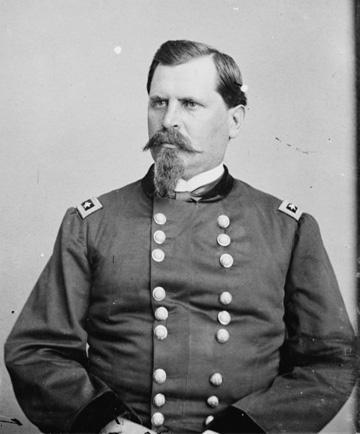 When it came to promotions during the Civil War, officers were often honored for their bravery in the field by being brevetted.

William B. Hazen is the perfect example. A career military man, he graduated from the U.S. Military Academy in 1855 and was commissioned a second lieutenant in the 4th U.S. Infantry. He was wounded fighting Comanches in Texas in 1859. Soon after the fall of Fort Sumter, he was promoted to captain of the 8th U.S. Infantry; however, he organized a volunteer unit and was named colonel of the 41st Ohio Infantry.

At the Battle of Stones River, Hazen and his brigade saved the day for the Union. Hazen was wounded during the fierce fight at the Round Forest and was finally promoted to brigadier general of volunteers, effective Nov. 29, 1862, for his gallant leadership.

That title brigadier general of volunteers differed in both pay and prestige from the same title in the regular U.S. Army. Other officers were “brevetted,” and given a battlefield promotion, which was temporary in nature. Typically, a brevetted officer would be given the insignia of their new rank, but not the pay or formal authority.

Brig. Gen. Phillip Sheridan was in a similar boat. His heroism had been honored, but not his pocketbook. He was a corps commander, but was just receiving the remuneration of his brigadier rank.

In January 1863, the U.S. government estimated the Civil War was costing $2.5 million a day. In 1879, a final official figure estimated the cost at $6.10 billion. The Confederacy spent an estimated $2.09 billion in its war effort.
Naturally, the higher the rank, the bigger the pension.

Both Hazen and Sheridan were frustrated at the lack of real promotions. It took leaving the Army of the Cumberland for the two men to receive the advancements they thought they deserved.

Sheridan joined Gen. U.S. Grant and the Army of the Potomac as a cavalry commander with the rank of major general. Hazen was transferred to Maj. Gen. William T. Sherman’s Army of the Tennessee where he served in the Atlanta Campaign, the March to the Sea and the Carolinas Campaign.

Sherman had learned about Hazen’s command abilities during the Chattanooga Campaign and particularly at Missionary Ridge.

Hazen was one of the most junior brigade commanders in the Army of the Cumberland. The hard-charging 33-year-old had grown frustrated with the jealousy and mistrust that categorized the command structure of what had been Rosecrans’ army.

But probably the final straw for Hazen was the treatment he received at the Battle of Pickett’s Mill, while still assigned to the Army of the Cumberland. Hazen’s brigade was regarded as a “shock” unit and was used in important assaults at Perryville, Stones River, Shiloh, Chickamauga and Missionary Ridge.

Following the Chattanooga campaign, the combined Army of the Tennessee and Army of the Cumberland engaged in a number of small battles trying to push south to Atlanta.

On May 27, 1864, the Union forces attempted a flanking movement near Pickett’s Mill, Ga, which was about halfway between Marietta and Dallas, Ga. Sherman, in command of the combined armies, ordered Maj. Gen. George H. Thomas to execute the plan. Thomas selected Gen. Oliver Otis Howard to lead the attack. Ironically, Howard was spanked at Chancellorville by a similar maneuver executed by Confederate Gen. Stonewall Jackson.

Howard, an interesting historical figure, went on to be the first Commissioner of the Freedman’s Bureau. Later, he fought in the Indian Wars, particularly in the Nez Perce campaign, with the resultant surrender of Chief Joseph. Howard University is named in his honor. He also founded Lincoln Memorial University in Harrogate, Tenn., for the education of the “mountain whites.”

Howard, called “The Christian General” because of his views on total abstinence, consulted with Army of the Cumberland division commander Gen. Thomas J. Wood following a five-hour march. The two generals inspected the Confederate lines and decided they had reached its eastern end. Actually, at the point surveyed by Howard and Wood, the heavily defended line had bent back south.

Holding that line was the best Confederate unit in the West, the 10,000 troops of Confederate Gen. Patrick R. Cleburne's Division, Hardee's Corps, Army of Tennessee.

Howard had only 4,000 troops in his force. Apparently unaware of the true situation, Wood suggested sending the best brigade in the Army of the Cumberland against the Confederate flank.

"We will put in Hazen and see what success he has," Wood said.

Hazen’s 1,500-man brigade was brought forward. Ambrose Bierce was an officer on his staff.

“For my commander and my friend, my master in the art of war, now unable to answer for himself, let this fact answer: when he heard Wood say they would put him in and see what success he would have in defeating an army--when he saw Howard assent--he uttered never a word, rode to the head of his feeble brigade and patiently awaited the command to go. Only by a look which I knew how to read did he betray his sense of the criminal blunder,” Bierce wrote.

Through thick woods and rugged ravines, the brigade was sent against a full division, supported by Gen. Joseph Wheeler’s cavalry.

The brigade was formed in four battalions, two in front and two in rear and spread across a front of 200 yards.
“For the first two hundred yards our course lay along the left bank of a small creek in a deep ravine, our left battalions sweeping along its steep slope. Then we came to the fork of the ravine. A part of us crossed below, the rest above, passing over both branches, the regiments inextricably intermingled, rendering all military formation impossible,” Bierce said.

A ‘dead line” soon formed. Bierce described it as a point where no man advanced except to fall. The dead line at Pickett's Mill was about 15 paces from the front of the Confederate line.

“When the United States troops paused in their advance within fifteen paces of the Texas front rank one of their color-bearers planted his colors eight or ten feet in front of his regiment, and was instantly shot dead. A soldier sprang forward to his place and fell also as he grasped the color-staff. A second and third followed successively, and each received death as speedily as his predecessors. A fourth, however, seized and bore back the object of soldierly devotion," reported Confederate Gen. Joseph E. Johnson.

Hazen’s troops were unsupported in their initial attack. After his brigade was decimated, other Union brigades moved forward, but were never able to get within a hundred yards of the Confederate position.

Loses were extremely high ... about 1,400 men, most of them from Woods’ division. Out of that total, about half of the casualties were in Hazen’s brigade.

“After we had come out of the fight I saw Gens. Howard and Hazen sitting on their horses in the woods. A fragment of the several regiments had rallied around a set of colors, and a lieutenant took charge of us ... the lieutenant halted us, stepped forward and saluted: ‘General, where is our brigade?’ he said.

‘We wish to report to our regiments.’

“Gen. Hazen looked at him a moment. The tears began to roll down his cheeks and he said, ‘Brigade, hell, I have none, but what I have left is over there in the woods,’” Crowell said.

Those responsible for debacle at Pickett’s Mill conveniently forgot about it.

“It is scarcely noticed in any of the reports of the Union commanders, and is ignored by Sherman in his memoirs; but it was the most fierce, bloody and persistent assault by our troops in the Atlanta campaign.
“The whole fight was terrific and the slaughter immense. Everybody was morose, and found fault with his superior – the men with their captains, the captains with their colonels, and so on all the way up,” he said.

In August, less than two months after Pickett’s Mill, Hazen was transferred to the Army of the Tennessee and placed in command of Sherman’s old unit, the 5th Division of the Army of Tennessee, which had been languishing under Brig. Gen. Joseph A. Lightburn.