Burt Brings His Message To Woodbury, Raises Over $3K For Juvenile Diabetes 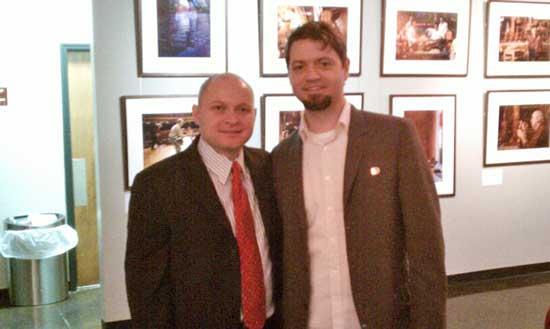 Coach Burt and Stephen Simmons.
Small towns across the United States are where many big dreams begin. The 2011 "Small Towns, Big Dreams Tour" kicked off Saturday, January 8 at the Cannon County Arts Center and community members braved the cold to support the Juvenile Diabetes Foundation.

Over $3,000 was raised and even a greater amount of awareness created during the month prior promoting the event. But on this particular night the true value came by seeing the joy brought to the two young children Maci (Sellars) and Luke (Blanton) that are affected by diabetes each day.

"What a night. This Small Towns and Big Dreams evening was as close to my vision of this dream as we have ever had,” said host Coach Burt. “Stephen was awesome, the crowd was awesome, and we had the opportunity to motivate and inspire people to go from where they are in their lives to where they want to be, while at the same time raising money for this wonderful cause.

"Diabetes changes a person's life forever and I think this night helped expose people to what it means to be affected with this disease and become more compassionate to how we can help. Inside of each of us is a hunger to marry our passion, our talents, and our conscience to a need in the world that we can help fulfill."

Presented as an evening of inspiration and passion the night touched on every human emotion where people laughed, cried, and cheered as Coach Burt spoke to the dreams of audience members.

The night was kicked off with a VIP book signing of Coach Burt's re-release of This Ain't No Practice Life and was joined by singer/song writer Stephen Simmons, a Woodbury native, who returned home to play for the first time since leaving to chase his dream of playing his music for the world.

The show included a touching tribute to young Maci Sellars with a video on her perseverance. Throughout the night Maci smiled and the crowd joined her with those smiles as Simmons and Burt took the stage together.

This movie was the driving force of Small Towns, Big Dreams. Burt first watched the movie in the Mountains of Gatlinburg and immediately following the movie he began to contemplate how he could serve a larger purpose. We all want to be a part of a bigger cause for meaning and contribution and Coach Burt was inspired to act and came up with the STBG concept.

Shannon Davenport, a local school board member in Cannon County and long time friend of Coach Burt fittingly ended the three hours of inspiration and passion with Wynonna Judd’s hit "Love Can Build a Bridge".

It may have only been one night, but this one message for one community and one cause will live on in the lives of those in attendance and will be one night that two young children will not forget.

Print
Members Opinions:
lionbasketball
[Delete]
Thanks you Burt and Mr. Simmons for helping a great cause!