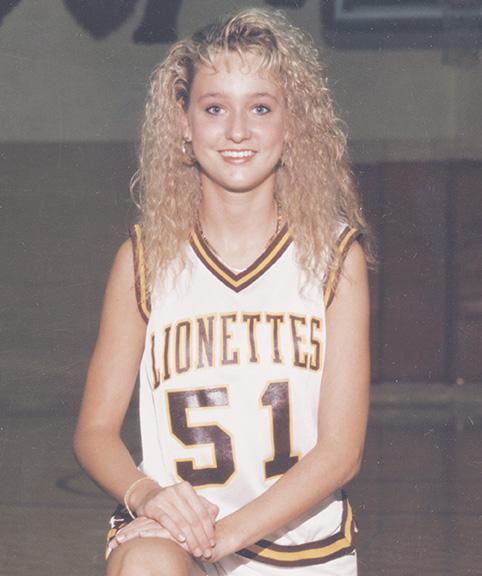 Beth (Stewart) Stark will be inducted into the Cannon Courier Sports Hall of Fame.

Beth Stewart Stark seemed to follow in her mother's footsteps growing up as a young standout on the basketball court at Cannon County High School in the early 1990s.

Beth will continue to follow in her mother's footsteps when she is inducted into the 2014 Cannon Courier Sports Hall of Fame at The Arts Center of Cannon County Thursday at 6:30 p.m.

Stark is one of six individuals, including her mother, who will be enshrined; however, she says her parents never pushed her to be an athlete.

"It was never forced," said Stark, the daughter of Frank and Gloria Stewart. "They never pushed me. We were always around sports and my dad was a crazy sports guy, too. He put my basketball goal in the backyard but it was never, 'Go do this, or go do that.' Dad would rebound for me. Mom and I would play horse. There was never a time that I didn't want to play basketball."

Going into the Hall of Fame with her mother only adds to the significance.

"It's a huge honor," Stark said. "I am very happy and honored because it is very special to me to go in with my mother. I don't think this is something that happens often, anywhere - a mother/daughter combination going into together. It makes my heart happy. I am so proud of where I am from and what the girls from our county have done through the years. It's a big deal to me."

Robert A. Harris, a two-time Hall of Famer, coached Gloria for three years and he also coached Beth at the outset of her Cannon County career.

"Basketball was in her blood," Harris said of Beth. "Beth and Gloria were similar as freshmen. You could see the talent was there. Beth just continued to develop as she went along."

Though basketball was in Beth's blood, she blazed her own trail and became one of the most dominant players in Cannon County history. She helped lead Cannon County to the only state championship in school history - the 1989 TSSAA Girls State Championship.

Stark's 1,809 career points is sixth all-time in Cannon County history. She was a three-time All-District performer, District Player of the Year, All-Region and All-State. She landed a scholarship at Lipscomb University where she developed into the most decorated player in its girls basketball history.

"Since Beth was a natural athlete, hard worker and great team player, there was no question that she would be successful at the next level," said former teammate and Hall of Famer Julie Powell. "She also had the essential combination of good footwork and great hands necessary to be a great post player."

Stark was inducted into the Lipscomb University Hall of Fame in 2008. She is the all-time leading scorer in program history with 2,880 points and holds school records for most field goals made (1,162), most field goals attempted (1,766), field goal percentage (65.8), free throws made and free throws attempted. Her awards included Transouth Player of the Year in 1995 and 1996, NAIA All-America First Team in 1995 and 1996 and team MVP in 1994 and 1995. She was also a Kodak All-America in 1995 and 1996. She helped lead the Lady Bison to four trips to the NAIA National Tournament.

It was Beth's love of family that led her to Lipscomb.

"My dad was chronically ill when I was in college," Stark said. "I feel like basketball probably gave him a couple more years of life. My dad was a huge driving force for me to be successful. He loved all of the team I played on and there was no bigger fan of girls basketball than him. He was happy for any girl that did well and he loved all of my teammates too."

Stark had numerous college offers following a heralded career at Cannon County. She narrowed her choices to Tennessee Tech or Lipscomb University because of their close proximity to Cannon County.

Gloria Stewart says her daughter is as much a Hall of Famer in life as she was on the basketball court.

"I am so proud of Beth," Gloria shares. "Beth was always such a good kid. She never caused any trouble and sports have a lot to do with that because it gives kids focus and something to look forward to. Beth's daddy was getting sick about the time she got out of high school. She chose Lipscomb because it was close to home so she could come see her daddy. We went to games even when he was sick. He had to see Beth play. She added years to his life."

Beth completed her Lipscomb career in the spring of 1996. Frank passed away later that fall.

It was there she blossomed from a timid youngster into a dominant star. Not only did she help lead Cannon County to a state championship, but she also played in three Substates and also led the Lionettes to the 1992 State Tournament. It would mark the school's final state tournament appearance for 20 years.

Stark vividly remembers how special the ladies were treated after winning the 1989 state championship.

"Playing basketball at Cannon County was meaningful in that to this day a few of my best friends in the world are girls I played with at Cannon County. It's just what we did," Stark said. "It was extremely exciting. I can remember that we were so happy to win and win for our county. I remember all of the things we got to do afterwards. It was a big deal for a group of country girls.

"They took us to the basketball banquet in limos. Some of us had never been in a limo. It was celebration after celebration. Joanne Tate came from Jennings Jewelers and gave us all gold pendants with the number 1. I still have mine. At Good 'Ole Days we were presented state championship jackets on the state. Winning was awesome but everything the county did for us after we won was amazing. Bringing pleasure to the people of Cannon County was special. I have such great memories of the stands being packed at all of our games - especially the road games."

Powell says Stark's emergence as a freshman was instrumental in Cannon County's 1989 title run for many reasons.

"Even as a freshman, Beth's athletic ability and height made an instant impact on our basketball team," Powell said. "Since she was a true center, she became our formidable force in the lane and also allowed other players, including myself, to transition to more natural small forward/shooting guard positions on the team. I specifically remember that Beth had a tremendous work ethic for a young player. She was dedicated to improving herself and our team, and was always humble in her success."

Former Cannon County coach Mindy Odom says Stark was destined for greatness because of a great combination of talent and work ethic.

Odom, now the girls basketball head coach at Cookeville, coached Stark as a junior and senior at Cannon County. The Lionettes reached the Substate both years and advanced to the Class AA State Tournament in 1992.

"Beth was the most coachable player I ever coached," Odom said. "She had a lot of talent but she always wanted to please. You only had to tell Beth how do to something once. Cannon County was my first head coaching job. Beth probably spoiled me because I was thinking everybody should be like that."

Odom brought out the best in Beth Stewart.

"I adored Coach Odom. She and I just clicked," Stark said. "I really, really valued her as a coach. I liked the way she coached and she demanded things from me. I owe her all of my defensive ability in college. She taught me how to play defense correctly. She is an outstanding teacher."

Odom also said she could sense the importance of family in Beth's life.