Bill Parsley To Serve On MTAR Board 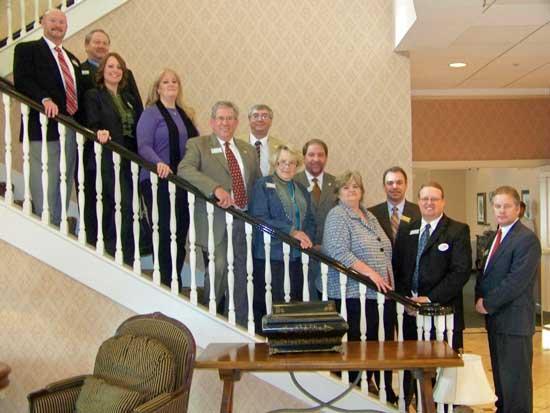 The Middle TN Association of REALTORS® held their 2010 Board of Directors Installation Ceremony on Thursday at the Stones River Country Club in Murfreesboro, at which time Dale Patterson and Debra Beagle were named 2009 REALTOR® of the Year and Rookie of the Year, respectively. The ceremony, which was attended by almost 200 MTAR members as well as visiting guests from local organizations, also served as the official beginning of the business year for Tennessee’s 4th largest REALTOR® association and featured the swearing in of the 2010 MTAR Board of Directors.

REALTOR® of the Year nominees were announced by Past-President Tim Wilson, who noted that nominees are “quality REALTORS® who have not yet received appropriate recognition for their professionalism, dedication, hard work, leadership, and hours of service”. The nominees are evaluated and voted upon by MTAR affiliate (or non-REALTOR®) members based on the agent’s involvement with the association, examples of excellence in their profession, and level of community involvement. This year’s nominees included Lisa Crowell of Coldwell Banker Snow & Wall Realty in Murfreesboro, Richard Lewis of Exit Realty Bob Lamb & Associates in Murfreesboro, and Dale Patterson of Keller Williams Realty in Murfreesboro.

Wilson noted that REALTOR® of the Year Dale Patterson “gives freely of his time and leads by example. Not only is he a leader in his company, he leads in our membership and our community. Dale continually seeks opportunities to enhance the tools of our industry for his clients and other professionals. He supports the arts, technology, and maintains a keen eye on the economics of our industry. Dale is politically active, an advocate for service, and an example of commitment.”

Patterson, a new addition to MTAR’s Board of Directors in 2010, is involved with several charitable projects such as the Angel Tree program, St. Jude’s Angel Program, and as a volunteer driver for Meals on Wheels. As 2009 MTAR Public Relations Chairman, Patterson oversaw the Association’s efforts with National Make a Difference Day, the 4th Grade Foresters Project, two charity golf tournaments, Toys for Tots, and relief efforts for children affected by the Good Friday tornadoes.

Rookie of the Year nominees are evaluated and selected based on the same criteria as REALTOR® of the year, but also must have been practicing real estate for no more than three years. 2009 Rookie nominees were Debra Beagle of Coldwell Banker Snow & Wall Realty in Murfreesboro and Willie Mangrum of Crye-Leike REALTORS® in Murfreesboro.

“Debra gives tirelessly of her time, talent, training, and heart to everyone” remarked Wilson. “She quietly works along side other leaders, and carries her share of the load while learning. Debra is kind, effective, and deserving of this recognition.” During her first year as a REALTOR®, Beagle has already earned the ABR, GRI, E-Pro, and Home Staging Specialist designations, as well as completed the “At Home with Diversity” program. Debra is active in her company, community and church, through her involvement with many fundraising activities, senior counseling services, and public information programs on the tax credit. Debra is bi-lingual, and shares her skill with the Hispanic community through advertisements and membership in the Hispanic Real Estate Professionals group.