BLACK: Demanding Answers On The Debt Limit
Posted on:
By:
Rep. Diane Black (R-TN)
This past week, I and my fellow freshmen colleagues in the House rattled some cages in the debate over raising the debt ceiling and reminded everyone in Washington just how serious we are about ending the big-spending status quo in Congress.
...
Budget Committee Begins Cutting Requests
Posted on:
From all evidence folllowing the first night of budget cuts, the various departments of Cannon County Government will be granted little leeway, if any, in their various budget requests.
...
CCHS Students May Face More Consequences For Unexcused Absences Beginning Next School Year
Posted on:
Missing school without a valid excuse may result in additional punishment for Cannon County High School students beginning the next school year.
...

Gayle Erwin To Speak At Cannon Community Church On June 21
Posted on:
Gayle Erwin travels around the globe playing, as he puts it, "the one string on my guitar." That "one string" is the Nature of Jesus, a message developed over a lifetime of study and experience — a simple message of servant lifestyle for this complex age.
... 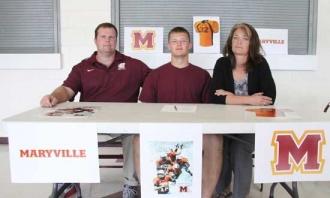 Walkup To Continue Career At Maryville
Posted on:
By:
TONY STINNETT. Courier Co-Editor
Gabe Walkup made a name for himself as one of the top football players in District 8-AA during a stellar football career at Cannon County.
...
Woodbury Set To Adopt 2011-12 Budget Tuesday
Posted on:
The Town of Woodbury Board of Mayor and Aldermen will meet in regular session Tuesday, June 7, at City Hall.
...