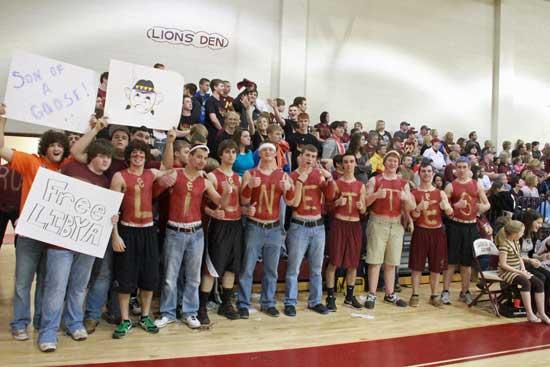 Members of the Cannon County student section, known as the "Lions Den," show their support for the Lionettes in the Region 4-AA opener at Robert A. Harris Gymnasium Friday. They were among hundreds who filled the gym and cheered Cannon County to a 73-44 w
Lionettes Knock Out Sequatchie County
Posted on:
By:
TONY STINNETT, Courier Co-Editor
Had the Region 4-AA girls first-round game between No. 8 Cannon County and Sequatchie County been a boxing match, it would have been called in the first round.
...
Lions To Battle Notre Dame Tonight
Posted on:
Cannon County's boys basketball team will play a Region 4-AA first-round game at Chattanooga Notre Dame tonight at 6 (Central). With a win, the Lions would advance into the semifinals Tuesday at 6 p.m.
...