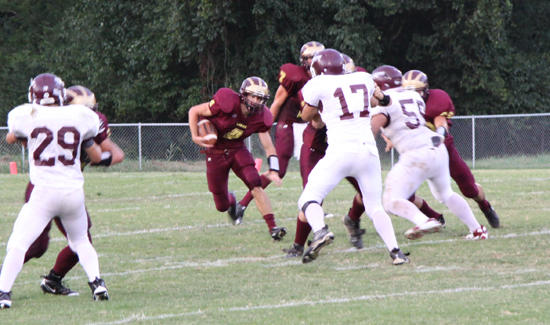 Daniel Wooden looks for an opening (photo by Sean Parker) See more game pictures in the Photo Gallery
Lions Fall In Opener, 42-14
Posted on:
By:
by CASEY HINDMAN
Cannon County's football Lions opened their 2009 season Friday night against the Spring Hill Raiders. The Lions came in to the game with high expectations after several successful pre-season scrimmages.
Spring Hill took the opening kick-off and moved the ball quickly down the field, but the Lion defense recovered a fumble to end the drive. The Lions were unable to move the ball and a 17 yard punt return set up the first Raider touchdown.
...