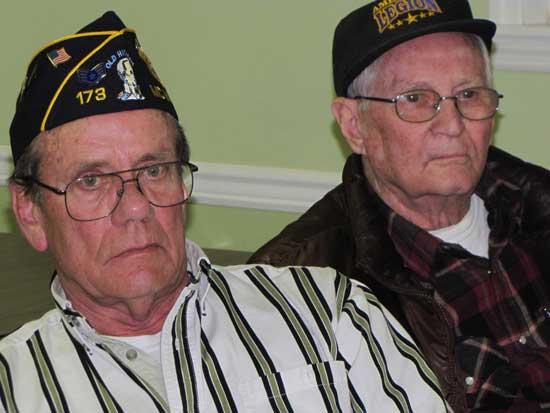 Members of the Warren County Post were present to help start up the local Legion.
The newly formed Hilton Stone American Legion Post #279 met for the second time Thursday night at the Senior Citizens Center. This was an important meeting for the newly formed group. They nominated members to fill the positions needed to operate. There were members from other Posts who will be with the new Post and guide the members through the first part of the year.

The knowledge of these members from the other Posts will help get the local Legion up and running in good time.

Dan Bowling, who has done a tremendous job getting the club off the ground here in Cannon County, opened the meeting. The meeting began with the Pledge of Allegiance and then an opening prayer.

Bowling then asked that if anyone was interested in a certain job; if so they could speak up and put themselves in a position to be nominated. Britt Knox was nominated to be the first Commander of this Post. The Vice-Commander went to Bob Eisenmann of the Hurricane Creek area of Cannon County.

Retired Sgt. Penny Daniels was nominated to be the Post Adjutant; Daniels is the county’s Veterans Affairs Officer. The financial office for the Post will be Dan Bowling.

Although at this time they are nominated, someone else could be nominated at next month’s meeting. If unopposed they will be sworn in as the Posts’ Officers.

Charlie Harrell, Retired Colonel Jim Stone and Bob Stoetzel will serve as the executive committee; the Unit Commander will be involved with the Executive Group.

The members of the other American Legions Post and the District Commander will be present next month for the swearing in ceremony.

“There has not been an American Legion Post in Cannon County since 1965,” said Bowling. “It is up to these new members to bring in more of the veterans into the Post.”

Not only do they sponsor clubs in the aforementioned organizations, but their duty is to the community and with the young. In today’s atmosphere of the War on Terror there are many of the nation’s soldiers who have fought continuously since the Gulf War. The men and women who are on duty now are in a time of war and are eligible for membership.

We still have WWII veterans around although they are passing away at a rate of 800 a day in the US, there are still plenty of Korean War vets around and then the veterans of the Vietnam War (1961 through 1975) are also eligible.

The Hilton Stone Post 279 will be getting together a color guard to stand guard over funerals of veterans when they pass away.

“We will honor their memories and be at the service of their families during the funeral,” said Commander elect Knox.

It is the desire that the newly formed Post will shine the light in the community to bring notice to the military veterans who have fought to keep America free.

The Preamble to the Constitution of the American Legions goes thus: For God and County We Associate Ourselves Together for the following Purposes: “To uphold and defend the Constitution of the United States of America;” “To maintain law and order;” “To foster and perpetuate a one hundred percent Americanism;” “To preserve the memories and incidents of our association in the Great Wars;” “To inculcate a sense of individual obligation to the community, state and nation;” “To combat the autocracy of both the classes and the masses;” “To make right the master of might;” “To promote peace and good will on earth;” “To safeguard and transmit onto posterity the principles of justice, freedom and democracy;” “To consecrate and sanctify our comradeship by our devotion to mutual helpfulness.”

If you know a friend or relative who has been looking for something to get involved with, and is a veteran please tell them about the American Legion, they are invited to come to the meeting to see what we are about.

If you are a Vietnam Veteran and find it hard to relate to anyone or just to be together with your own kind who has experienced what you have experienced, tell them about the American Legion.

After next month’s election the chosen officers will post their phone numbers to allow you to get your questions answered about this service organization. The Legion also has auxiliaries (wives of service men) and the sons of the American Legion. More will be posted later or you can find the web site and learn more about your American Legion.