A new heart for Lexi 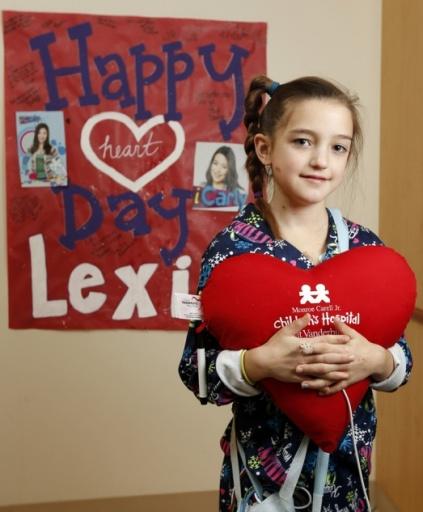 Lexi Browning was saved by her mom, Michelle's, nursing skills.

By JESSICA PASLEY/ Special to the Courier

Michelle Browning never imagined her nursing skills would save the life of her youngest child. But without her natural instinct to begin CPR her daughter, 9-year-old Lexi, may not have survived after her heart suddenly stopped.

"We didn't know anything was wrong until June 9," said Lexi's mom, Michelle Browning. "We were at a friend's house for a get-together. Someone yelled that Lexi had fallen. I assumed it was one of those 'fall down and skin your knee' type of things, but she was in full cardiac arrest."

Lexi was rushed to the Monroe Carell Jr Children's Hospital at Vanderbilt where tests revealed the diagnosis - restrictive cardiomyopathy. Doctors told her parents her only option for long-term survival was a heart transplant.

Lexi spent more than a week at Vanderbilt while doctors worked to stabilize her condition, placed her on the heart transplant list and implanted a defibrillator in case her heart needed to be shocked back into rhythm while waiting on a new heart.

Today, Lexi is recovering after receiving that life-saving heart transplant on Jan. 17.

According to her cardiologist, Debra Dodd, M.D., her prognosis is excellent.

"Her chances of being alive 10-15 years down the road and longer are great," said Dodd, associate professor of Pediatrics. "She has really done well with her new heart and has had absolutely no issues.

"The miraculous thing, outside of her mom being able to jump in and provide CPR, giving her a second chance at life, is that she has really sailed through this transplant. Her new heart is working wonderfully."

"Basically, the heart gets stiffer and stiffer and the heart muscle doesn't relax between heartbeats. Although there are currently no treatments outside of transplant for this form of cardiomyopathy, genetic testing can often identify the protein causing the abnormality."

Dodd said she and her colleagues see one or two cases a year, with the majority receiving transplants.

Lexi and her mom will be staying at the Ronald McDonald House during her recovery while waiting to return home to dad, Jack, in Woodbury.

Browning said she is more at ease now that her daughter has a new heart.

"When she was first diagnosed, there was not much they could do for her," said Browning. "We just had to wait for a heart and keep our routine visits with Dr. Dodd.

"I wanted to watch her every second and not let her out of my sight. It was really hard, but all of that is behind us now."

Although it will be a few months, Lexi is looking forward to enjoying her favorite hobby, riding horses, specifically her horse named Crook. Following the initial accident Lexi was restricted from riding for four months, but was able to get in two buddy rides prior to her transplant.

Now she just can't wait to see Crook and eventually get back in the saddle again.

While Michelle Browning is also excited about the future for her daughter, she knows it came at a high price for another family.

"We are so grateful to the family who donated her heart," said Browning.

"I feel sorrow and pain for that family's loss, but at the same time we are so thankful for their gift of life. It has been really an emotional journey."